Our mother star was once again less active than normal in March. The observed solar sunspot number (SSN) was 54.9, which was about 2/3 of the mean value (82.5) for this month into the cycle. Here’s what the current solar cycle (SC) looks like so far: 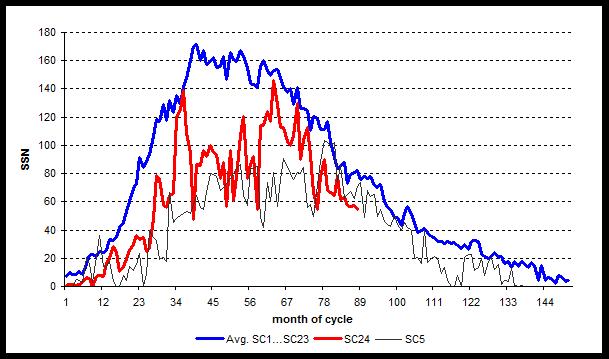 Note the similarity of the current Solar Cycle 24 to Solar Cycle 5 which is associated with the Dalton Minimum. It maybe a little too early to compare similarities with Solar Cycles 5 and 6, leading the planet into another mini ice age, like that during the Dalton Minimum.  Or whether this minimum will combine with a lower Solar Cycle 25 which could  lead to a 30-year cooling period producing another Little Ice Age, like that during the Maunder Minimum.  We will just have to wait and watch the climate evolve as the sunspots decline.