According to a report at Space Weather. 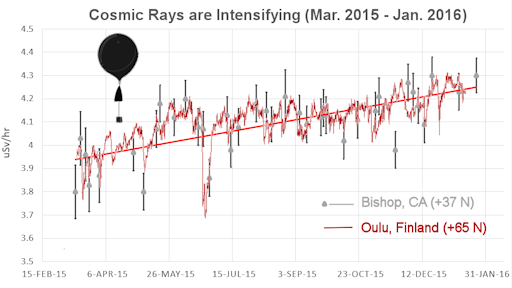 The ongoing increase, which has been tracked since early 2015, will likely accelerate in the months and years ahead as the solar cycle swings away from Solar Max.

This result is of interest to everyone from mountain climbers and air travelers to operators of high-altitude drones.

This decline could accelerate over time as the cosmic rays continue to increase. Or not. Stay Tuned.

This a report from the Climate Change Dispatch that I found very interesting. Some reader many know the details as it is from a November 2015 post.

Powerful deep Arctic Ocean geological heat flow forces have just sent us a very obvious signal, but are climate scientists listening? The answer is no, however geologists hear it loud and clear!

As winter begins to settle in across the Arctic Ocean and sea ice extent rapidly expands, a very interesting high temperature and low salinity hole has just been punched in the sea ice at a very telling location: directly above the deep ocean Gakkel Ridge Rift / Fault System (Figures 1, 2, and 3 in the original post).

This world class plate tectonic pull-apart rift is a 1,000-mile-long fault system on the seafloor that has in recent past pulsed massive amounts of heat into the overlying ocean and thereby melting large portions of the ice that floats above the heated ocean column.

So what if anything is to be learned from the recent October 12 geologically induced deep-ocean floor heat pulse that punched a small hole in the Arctic sea ice? Many things, most of which have surprisingly large implications concerning the entire climate change discussion.

Here is how it works:

Climate scientists who favor the theory of man-made global warming have maintained for many years that the accelerated melting rate of the Arctic sea ice during the 1999-2007 time period was entirely due to man-made CO2 emissions which acted to rapidly warm the atmosphere. This unusual Arctic melting was greater than the melting rate associated with Earth’s ongoing and very normal 11,500-year-long post-glacial period melt rate.

Many climate scientists have begrudgingly stuck to this human-induced atmospheric warming story even though diverse and compelling amounts of data have now cast serious doubt on this hypothesis. It is clear to most scientists that non-atmospheric natural forces play the dominate role in driving sea ice extent and thickness such as well known variations in Earth’s astronomical orbit patterns, long-term cyclic changes in deep-ocean current patterns, and most importantly variations in geologically induced heat and chemically charged fluid flow from deep ocean faults and volcanoes (see previous CCD posts).

Keep in mind this latest October 12 event is not associated with obvious earthquake swarms and proven volcanic eruptions as was the case during the 1999 – 2007 event. This earlier event was powerful but not obvious to those who did not understand its true nature. Even though it was associated with an extensive low-intensity earthquake swarm, a huge methane release, and a significant series of volcanic eruptions along the Gakkel Ridge it was, and still is dismissed as insignificant by most climate scientists advocating the theory of man-made global warming.

However, many other scientists now realize that the 1999-2007 Gakkel Ridge heat and chemically charged fluid flow event was the root cause of accelerated the Arctic sea ice melting rate. An event that fits well with the Plate Climatology Theory, geological forces strongly influence climate.

The question is what role did Plate Climatology play in Grand Minimums, what could it play in the Next Grand Minimum?

It is not clear why, but when the earth cools and sunspots are at their minimum, volcanic activity on earth seems to increase, especially super volcanos that leave a significant eruption signature. See graphic below:

The most dangerous super volcano in the US is a volcanic plume that has been sliding northeast, across Idaho for millions of years and last erupting about 640,000 years ago in north-western Wyoming. The Yellowstone Caldera was created by a massive volcanic eruption approximately 640,000 years ago. Subsequent lava flows filled in much of the caldera.

UK Express has a volcano warning:

Instances of volcanic eruptions are their highest for 300 years and scientists fear a major one that could kill millions and devastate the planet is a real possibility.

Experts at the European Science Foundation said volcanoes – especially super-volcanoes like the one at Yellowstone National Park, Wyoming, which has a caldera measuring 34…