Temperatures in Baghdad range from around 2C in winter to 45C in the summer – but ancient Arabic writings have revealed that the city experienced a dramatic frozen period around 1,000 years ago.

Spanish researchers from the University of Extremadura found 9th and 10th century (3rd and 4th in the Islamic calendar) sources that refer to snowfalls in the Iraqi capital in 908, 944 and 1007 and even rivers being frozen.

These are extreme events for Baghdad – for example, the only snowfall in the modern era took place in 2008 – and help meteorologists better understand today’s climate.

Clues about weather patterns in Baghdad came from writers such as al-Tabari (913 AD), Ibn al-Athir (1233 AD) and al-Suyuti (1505 AD) – who all mentioned the climate from time to time.

‘Climate information recovered from these ancient sources mainly refers to extreme events which impacted wider society such as droughts and floods.

‘However, they also document conditions which were rarely experienced in ancient Baghdad such as hailstorms, the freezing of rivers or even cases of snow.

These signs of a sudden cold period confirm suggestions of a temperature drop during the tenth century, immediately before the Medieval Warm Period.

‘We believe the drop in July 920 AD may have been linked to a great volcanic eruption but more work would be necessary to confirm this idea.’

You can read the rest of the article HERE.  This Chart puts the dates in perspective with a historical time line:

I would like to see if there were similar freezing events during the LIA. I will do some digging on the Internet. If you know of some, please let me know.

“Forecasters predict that a new ice age will begin soon,” says this article on russia-ic.com.

“Habibullo Abdusamatov, a scientist from the Pulkovo Observatory of the Russian Academy of Sciences considers that the sharp drop in temperature will start on the Earth in 2014.

“According to the scientist, our planet began to “get cold” in the 1990s. The new ice age will last at least two centuries, with its peak in 2055.

“It is interesting, that the same date was chosen by the supporters of the theory of global warming.

“The expected decrease in temperature may … become the fifth over the past nine centuries, reports Hydrometeorological Center of Russia. Experts call this phenomenon the “little ice age”, it was observed in the XII, XV, XVII, XIX centuries. This cyclicity makes the theory of upcoming cold weather in XXI century look like truth.”

H/T to Ice Age Now for this report.

Steven Goddard has the details at Real Science in his post:  Joe Bastardi Nailed It.

The eight coldest days of the last decade have all occurred in the first seven weeks of 2012. Temperatures are currently 0.4 degrees colder for the date than any other year in the past decade. Temperatures have dropped almost a full degree since 2010.

Meanwhile, the hockey team continues to ramp up the lies about rising temperatures, and Phil prepares to throw any remaining integrity out the window with HadCRUTv4

Are we on the cusp of the slipper slope of declining temperatures? Stay Tuned!

Earth’s clouds got a little lower — about one percent on average — during the first decade of this century, finds a new study based on NASA satellite data. The results have potential implications for future global climate.

Scientists at the University of Auckland in New Zealand analyzed the first 10 years of global cloud-top height measurements (from March 2000 to February 2010) from the Multi-angle Imaging SpectroRadiometer (MISR) instrument on NASA’s Terra spacecraft. The study, published recently in the journal Geophysical Research Letters, revealed an overall trend of decreasing cloud height. Global average cloud height declined by around one percent over the decade, or by around 100 to 130 feet (30 to 40 meters). Most of the reduction was due to fewer clouds occurring at very high altitudes.

Lead researcher Roger Davies said that while the record is too short to be definitive, it provides a hint that something quite important might be going on. Longer-term monitoring will be required to determine the significance of the observation for global temperatures.

A consistent reduction in cloud height would allow Earth to cool to space more efficiently, reducing the surface temperature of the planet and potentially slowing the effects of global warming. This may represent a “negative feedback” mechanism — a change caused by global warming that works to counteract it. “We don’t know exactly what causes the cloud heights to lower,” says Davies. “But it must be due to a change in the circulation patterns that give rise to cloud formation at high altitude.”

The question in my mind, is this an indicator of long term cooling?

I have added a link to Dr. Nicola Scafetta’s harmonic model of the global temperatures in the right sidebar. Click on the graphic for details.

Dr Scafetta thnks that global temperature are made of four major decadal and multidecadal cycles (period 9.1, 10.4, 20 and 60 years), which are approximately consistent with four major solar/lunar/astronomical cycles, plus a corrected anthropogenic net warming contribution.

You thoughts on climate cycles.

I have updated the fuel price plots.  An AP story indicates that some of the increase is fuel prices is due to the excessive cold in Europe, which has increased the demand for heating oil. We are most fortunate in the US that our winter is rather mild, while Europe is freezing. South America, Australia and New Zealand are having a very cool southern hemisphere summer.

CNN has this news on ships locked in ice and rivers freezing over for the first time in 25 years.

The big freeze is not likely to end any time soon, Miller said, with the Arctic air forecast to continue spilling deep into Europe, keeping temperatures well below average and allowing the snow to continue to pile higher and higher.

In Ukraine, the worst-affected country, well over 100 people have died and more than 3,000 have sought hospital treatment.

State news agency Ukrinform said more than 120 ships — most of them foreign — were trapped in the Kerch Strait, linking the Sea of Azov to the Black Sea, because of ice.

Parts of the Danube River, one of the most important rivers in Europe for commerce, have nearly frozen over for the first time in 25 years.

Read the rest of the story HERE.  Here is a look at history, every extended warm period was closed with a rapid cooling.

In 2006 I wrote about the Return of the Dalton Minimum in this paper:  dalton_minimum

The main focus of the paper was on solar cycles that are about 200 +/- 10 year long. Below is a chart that compare the solar activity during the Maunder Minimum and Dalton Minimum and the current chain of cycles with a projection of future temperatures. We are continuing down the slope of cooling according to satellite temperatures shown HERE.

Source for the data is listed in the graphic. More in the Maunder Minimum in a future post.

According to HaCRUT, interior temperatures in Alaska have cooled a couple of degrees since 2004, and are now cooler than the 1880s.

Alaska had a very cold and snowy winter, now it will be interesting  to see if they have a cooler than normal summer. Stay Tuned. 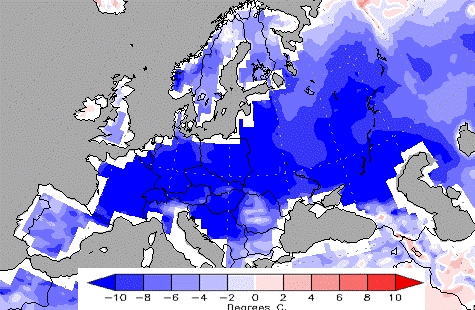 Germany’s no. 1 daily Bild (by circulation numbers) reports on the Killer Cold now paralyzing Europe and Asia, and calls it the worst in 25 years. The cold has hit Eastern Europe especially hard, with temperatures plummeting to -30°C throughout the Ukraine and Poland. So far the killer cold wave’s death toll now up to 220! 101 in Ukraine — 24 in Romania — 17 in Czech Republic — 11 in Slovakia — 64 in Russia – no end in sight!

On the other side of the world Japan is being buried in snow.

The prefecture of Niigata, Japan, has asked for a dispatch of troops to help in the wake of record-setting snowfalls, according to reports on Wednesday. 3 people have died in the northern part of Japan from avalanches in Akita. The Ground Self-Defense Force of Japan was expected to send troops to the town of Uonuma, where a snow depth of 4.09 meters, or 13.4 feet, has reportedly built up.

Here at home in Colorado they are dealing with One of the highest snowfall events for the month of February on record for Denver.

“This storm has the potential to be one of the highest snowfall events for the month of February on record for Denver,” says Sky View Weather. “The only problem with setting the record is that DIA has to report the snow for it to become official. The record currently stands at 14.1″. Snowfall of this type is typically confined to the fall and spring months with January and February one of the direr snow producing months of the year on average.”

Yes, we have been had warmer and drier weather than normal here in Nevada County, but be reminded that some of our deepest snow storms have come in the month of February. We could yet see some deep snow and cold weather.

When examining the ice core records, it is clear that the cold comes on much faster than the warming. These temperature plots by Climatologist Cliff Harris and Metrologist Randy Mann demonstrate the warming rose and then leveled off and then there a rapid temperature decline.  They remind us that we should remember, that the Earth’s coldest periods have usually followed excessive warmth. Such was the case when our planet moved from the Medieval Warm Period between 900 and 1300 A.D. to the sudden ‘Little Ice Age,’ which peaked in the 17th Century.

Our Modern Warm Period may be coming to an end.  The question is when will we recognize that we are on the down slope of a very steep curve?