Feb. 21, 2019: Cosmic rays in the stratosphere are intensifying for the 4th year in a row. This finding comes from a campaign of almost weekly high-altitude balloon launches conducted by the students of Earth to Sky Calculus. Since March 2015, there has been a ~13% increase in X-rays and gamma-rays over central California, where the students have launched hundreds of balloons.

The grey points in the graph are Earth to Sky balloon data. Overlaid on that time series is a record of neutron monitor data from the Sodankyla Geophysical Observatory in Oulu, Finland. The correlation between the two data sets is impressive, especially considering their wide geographic separation and differing methodologies. Neutron monitors have long been considered a “gold standard” for monitoring cosmic rays on Earth. This shows that our student-built balloons are gathering data of similar quality.

Why are cosmic rays increasing? The short answer is “Solar Minimum.” Right now, the 11-year solar cycle is plunging into one of the deepest minima of the Space Age. The sun’s weakening magnetic field and flagging solar wind are not protecting us as usual from deep-space radiation. Earth to Sky balloon launches in multiple countries and US states show that this is a widespread phenomenon. 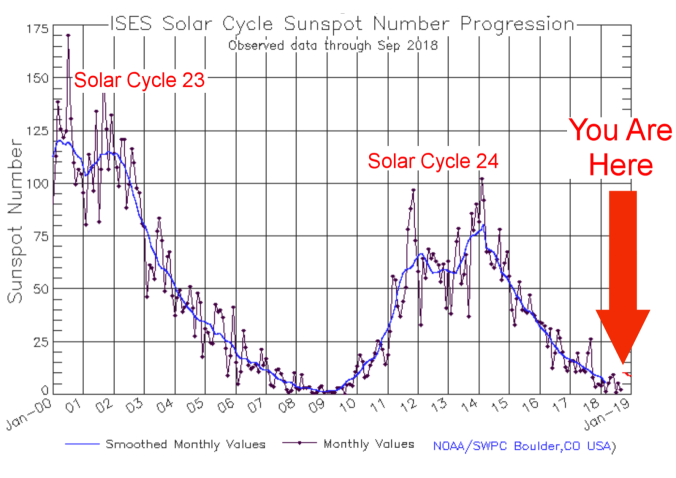 Cosmic rays are of interest to anyone who flies on airplanes. The International Commission on Radiological Protection has classified pilots as occupational radiation workers because of cosmic ray doses they receive while flying. A recent study by researchers at the Harvard School of Public Health shows that flight attendants face an elevated risk of cancer compared to members of the general population. They listed cosmic rays as one of several risk factors. There are also controversial studies that suggest cosmic rays promote the formation of clouds in the atmosphere; if so, increasing cosmic rays could affect weather and climate.

Thanks to Dr. Phillips for sharing this post from Spaceweather.com  [Emphasis added]

The more cosmic rays the more clouds, which results in more cooling of the planet.

Previously, scientists suggested that sunspot cycle 25 could be weaker than the current cycle, potentially meaning a period of global cooling could ensue. However, this has largely been ruled out, with a team of scientists in India recently predicting that the next solar cycle could be even stronger than the current one.

The Sun’s activity cycle governs the radiation, particle and magnetic flux in the heliosphere creating hazardous space weather. Decadal-scale variations define space climate and force the Earth’s atmosphere. However, predicting the solar cycle is challenging. Current understanding indicates a short window for prediction best achieved at previous cycle minima. Utilizing magnetic field evolution models for the Sun’s surface and interior we perform the first century-scale, data-driven simulations of solar activity and present a scheme for extending the prediction window to a decade. Our ensemble forecast indicates cycle 25 would be similar or slightly stronger than the current cycle and peak around 2024. Sunspot cycle 25 may thus reverse the substantial weakening trend in solar activity which has led to speculation of an imminent Maunder-like grand minimum and cooling global climate. Our simulations demonstrate fluctuation in the tilt angle distribution of sunspots is the dominant mechanism responsible for solar cycle variability.

It seems the science is not settled. Some scientists say we are headed for long term quiet sun and others more of the same. Only time will reveal the veracity of the various claims. Stay Tuned.

What do you think? Stronger? Weaker? Same?

Definition — cusp: a point of transition between two different states

The transition from the Medieval Warm Period and the Little Ice Age was punctuated by extreme climate events, intense storms, floods, and droughts according to Lynn Ingram and Francis Malamud-Roam writing in The West Without Water. According to the authors, the transition from the Little Ice Age to the Modern Warm Period also experienced erratic weather extremes. Wolfgang Behringer, writing in the Cultural History of Climate, found similar transitions to more extreme weather. These extreme record-setting events are a signal that the overall climate is moving to a different state, in other words on the cusp of climate change.

Japan’s northern island of Hokkaido: Record cold temperatures, minus 24.4 C, the lowest seen since it began compiling such data in 1957.

Seattle: Coldest February in 30 years, the 4th coldest in 75 years, the 3 years that were colder were 1989, 1949 and 1956. “This month has been so snowy that it is now setting records for daily and monthly totals,” says the National Weather Service.

Minnesota: Minus 38 degrees recorded in Melrose, Minnesota, The nation’s coldest wind chill factor, minus 70, was reported in Ely, Minnesota on 30 January 2019.

The proponents of anthropogenic global warming are attributing these extreme weather to human emission of greenhouse gases. However, after looking back through climate history, such as the Cultural History of Climate and The West without Water, I am inclined to attribute these record-breaking events to the transition point for the Next Grand Minimum.

Your thoughts, are we on the cusp, or is it just climate change weather?

Everyone has heard the bad news. Imminent Climate Apocalypse (aka “global warming” and “climate change”) threatens humanity and planet with devastation, unless we abandon the use of fossil fuels.

Far fewer people have heard the good news. The sun has just entered its Grand Minimum phase, and the Earth will gradually cool over the next few decades.

Why should we all hope Earth will cool? Because nobody with any trace of human decency would hope the Earth will actually suffer catastrophic warming.