The No Tricks Zone has the story:

The daily Berliner Kurier here writes today that solar physicists at the ultra-warmist Potsdam Institute for Climate Impact Research (PIK) are warning that Europe may be facing “a mini ice age” due to a possible protracted solar minimum. – See more at: http://notrickszone.com/2016/06/29/u-turn-scientists-at-pik-potsdam-institute-now-warn-of-a-mini-ice-age/#sthash.7z2uh3EJ.dpuf

That’s the conclusion that solar physicists of the Potsdam Institute for Climate Impact Research reached when looking at solar activity.”

The source of the Berliner Kurier report is the Austrian weather site wetter.at here. The wetter.at site writes that some solar physicists suspect the current solar inactivity may be “the start of a new grand minimum” like the one the planet saw in the 17th century and left Europe in an ice box.  [Emphasis added]

Science journalist Michael Odenwald at the German news weekly FOCUS used to be quite the warmist, and maybe he still is. But his latest article here tells us that he may be opening up to other climate change explanations: natural factors such as solar activity. Solar activity has quieted over the last years. Photo image: NASA Odenwald’s article focusses on the sun’s recent solar activity, noting that the current cycle has only been about as half as active as normal and that the “sun in the second half of the 20th century was unusually active over several cycles.” He then notes how the earth’s climate has suspiciously stopped warming since the sun went quiet. “Our planet could cool down” Before citing the works of geophysicist Ilya Usoskin of the Finnish University Oulu, Odenwald writes: The current low activity of the cosmic oven has possible dramatic consequences for our planet: Our planet could cool down. Perhaps the quiet sun is hidden behind another phenomenon over which scientists have long been wondering about: At around the year 2000 global warming came to a halt.” Odenwald also informs readers that the high level of solar activity from 1950 bis 2009 indeed had been an outlier and that it is clear that “the global temperature, which has increased for more than 100 years, rose most strongly from 1975 to 2000. According to the IPCC the 30-year period from 1983 to 2012 in the northern hemisphere was the warmest in 1400 years. Roughly calculated it coincides with the most recent Grand Maximum.” Warnings of a little ice age Odenwald also writes that some climatologists believe “the real driver of climate change is our sun. Some are even warning of a new little ice age.” 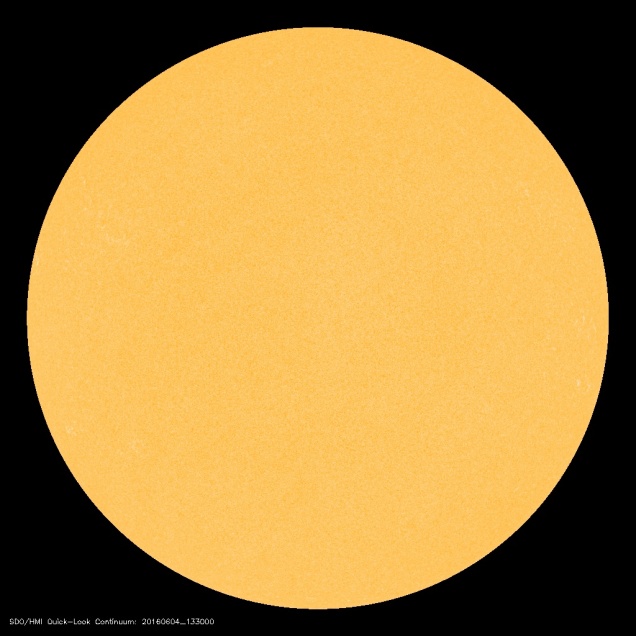 There are no visible sunspots on the most current solar image; courtesy NASA/SDO, spaceweather.com
Meteorologist Paul Dorian shares some thought on the impact when spots vanish, the potential for a grand minimum.

Finally, if history is any guide, it is safe to say that weak solar activity for a prolonged period of time can have a cooling impact on global temperatures in the troposphere which is the bottom-most layer of Earth’s atmosphere – and where we all live. There have been two notable historical periods with decades-long episodes of low solar activity. The first period is known as the “Maunder Minimum”, named after the solar astronomer Edward Maunder, and it lasted from around 1645 to 1715. The second one is referred to as the “Dalton Minimum”, named for the English meteorologist John Dalton, and it lasted from about 1790 to 1830 (above).

Both of these historical periods coincided with colder-than-normal global temperatures in an era that is now referred to by many scientists as the “Little Ice Age”. One of the reasons prolonged periods of weak solar activity may be associated with colder global temperatures has to do with a complicated relationship between solar activity, cosmic rays, and clouds on Earth.  Research studies in recent years have found that in times of low solar activity – where solar winds are typically weak – more cosmic rays reach the Earth’s atmosphere which, in turn, has been found to lead to an increase in certain types of clouds that can act to cool the Earth.

This historically weak solar cycle continues the recent downward trend in sunspot cycle strength that began over thirty years ago during solar cycle 22. If this trend continues for the next couple of cycles, then there would likely be increasing talk of another “grand minimum” for the sun which correlates to an extended decades-long period of low solar activity. Some solar scientists are already predicting that the next solar cycle will be even weaker than this current one which has been historically weak. However, it is just too early for high confidence in those predictions since many solar scientists believe that the best predictor of future solar cycle strength involves activity at the sun’s poles during a solar minimum phase – something we are now rapidly approaching – and the current blank look to the sun is liable to become more and more frequent in the months to come.

Ric Werme writing at Watt Up With That has an interesting weather story that takes place during the Dalton Minimum. The article is quite long and he provides this Executive Summary:

The full article is HERE.

I found the comments on the article equally interesting.  My grandmother Thomas was an avid gardener and had a kitchen garden all of her adult life. She kept a record of the last spring frost and the first fall frost in Nevada County CA and adjusted her planting and harvesting based on the record of the past.   An 1812 summer with late and early frosts would have thrown her for a loop.