H/T to P Gosselin at No Trickszone.

By Frank Bosse and Fritz Vahrenholt
(Translated/edited by P Gosselin)The sun was also very sub-normally active in February. Although we are in the middle of the minimum, the sunspot number of 0.8 for the 123rd month into the cycle is very low. On 26 days of the month no spots were visible, only on 2 days was there a little, symmetrically distributed over both solar hemispheres.The only exciting question currently: When will the minimum be finished and will solar cycle 25 begin? Although 6 spots of the new cycle were already visible in February with a significantly higher resolution, estimates are difficult.March again was dominated by some spots of the “old” SC24.  The rule: “weaker cycles often last longer than stronger cycles” could hold.

Fig. 1: The monthly resolved spot activity of the Sun over the solar cycle (SC) 24 at the beginning of December 2008 (red) compared to a mean cycle, calculated from the arithmetic mean of all previously systematically observed cycles 1-23 (blue) and the not dissimilar cycle 5 at the beginning of May 1798.

The long solar minimum since October 2017 (cycle month 107) can be seen very well, the mean SSN in this period was only 7.1. The comparison of the cycles among each other follows:

Fig. 2: The strength of the sunspot activity of each cycle in comparison. The numbers in the diagram are obtained by adding up the monthly deviations between the observed values and the mean value (blue in Fig.1) up to the current 123rd cycle month.

Figure 2 shows that five cycles (No. 8, 15, 16, 18, 22) did not have a month 123 at all. Instead the following cycle started. In this respect, the picture is now somewhat distorted towards the end of the cycle.

A look at the solar polar fields shows that the minimum may have passed the peak, both smoothed hemispheric values decrease.  The maximum strength of the smoothed average is currently 64, in the last minimum we saw 55, in the minimum before SC 23 the value was 104.

There is a lot that points to a SC25 that will be slightly stronger than SC24, but will remain below the zero line (standing in Fig.2 for an average cycle). Thus the sun therefore likely to remain on low flame for another 12 years. The operators of satellites and the ISS will be pleased, the upper atmosphere expands less with less solar activity and this saves orbital manoeuvres to maintain the height of the objects.

Over the last twenty years there has been good progress in understanding the solar influ- ence on climate. In particular, many scientific studies have shown that changes in solar activ- ity have impacted climate over the whole Holocene period (approximately the last 10,000 years). A well-known example is the existence of high solar activity during the Medieval Warm Period, around the year 1000 AD, and the subsequent low levels of solar activity during the cold period, now called The Little Ice Age (1300–1850 AD). An important scientific task has been to quantify the solar impact on climate, and it has been found that over the eleven- year solar cycle the energy that enters the Earth’s system is of the order of 1.0–1.5 W/m2. This is nearly an order of magnitude larger than what would be expected from solar irradiance alone, and suggests that solar activity is getting amplified by some atmospheric process.

Three main theories have been put forward to explain the solar–climate link, which are:
• solarultravioletchanges
• theatmospheric-electric-fieldeffectoncloudcover
• cloudchangesproducedbysolar-modulatedgalacticcosmicrays(energeticparticles originating from inter stellar space and ending in our atmosphere).

Significant efforts has gone into understanding possible mechanisms, and at the moment cosmic ray modulation of Earth’s cloud cover seems rather promising in explaining the size of solar impact. This theory suggests that solar activity has had a significant impact on climate during the Holocene period. This understanding is in contrast to the official consensus from the Intergovernmental Panel on Climate Change, where it is estimated that the change in solar radiative forcing between 1750 and 2011 was around 0.05 W/m2, a value which is en- tirely negligible relative to the effect of greenhouse gases, estimated at around 2.3 W/m2. However, the existence of an atmospheric solar-amplification mechanism would have im- plications for the estimated climate sensitivity to carbon dioxide, suggesting that it is much lower than currently thought.

In summary, the impact of solar activity on climate is much larger than the official consen- sus suggests. This is therefore an important scientific question that needs to be addressed by the scientific community.

Shared Post by Dr. Tony Phillips from Spaceweather.com  Another example of how little we know about the electronic soup that surrounds our planet.

March 13, 2019: Long lines. Narrow seats. Baggage fees. You recognize this list. It’s the downside of flying on modern commercial airlines. And now we have a new item to add: cosmic ray neutrons. 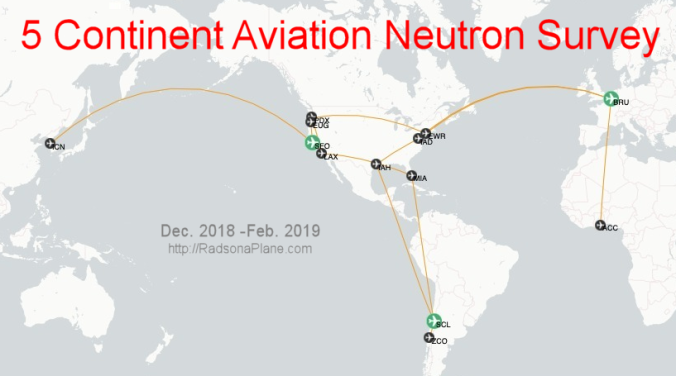 Hervey logged 83 hours in the air as he traveled 41,500 miles above 30,000 feet. For reference, that’s almost twice the circumference of the Earth. The entire time, he gathered data on X-rays, gamma-rays and neutrons in an energy range (10 keV to 20 MeV) similar to that of medical radiology devices and “killer electrons” from the Van Allen Radiation Belts.

The results were eye-opening. During the trip, Hervey recorded 230 uGy (microGrays) of cosmic radiation. That’s about the same as 23 panoramic dental x-rays or two and a half chest X-rays. Moreover, 41% of the dose came in the form of neutrons. This confirms that cosmic-ray neutrons are abundant at aviation altitudes and must be considered in any discussion of “Rads on a Plane.”

Researchers have long known that cosmic rays penetrate airplanes. Our own 3-year survey of global radiation shows that X-rays and gamma-rays at aviation altitudes are typically 50 times stronger than sea level. This new survey focuses on neutrons, a more potent type of radiation from deep space. Studies show that neutrons can be ten times more effective at causing biological damage compared to X-rays and gamma-rays in the same energy range. Neutrons are so effective, they are used for cancer therapy, killing tumors better than other forms of radiation.

Should we be worried about Hervey? Although he absorbed a lot of radiation during the survey, he did so slowly. Hervey’s whole body dose was spread out over 14 flights and 3 months–unlike, say, a dental X-ray which is localized to the jaw and delivered in a split-second. Slow delivery gives the body time to respond, repair damage, and move on without obvious health effects. On the other hand, at least one study shows that low-dose radiation received over a long period of time may slightly increase the risk of leukaemia, while flight attendants have been found to have a higher risk of cancer than the general population.

Our survey also revealed some geographical variations. Generally speaking, neutron radiation was stronger near the Arctic Circle and weaker near the equator. It was weakest of all, however, in flights over Chile as the aircraft skirted the South Atlantic Anomaly. We will be investigating these variations with additional flights in the near future.

In a guess post at Watts Up With That on the cooling signals embedded in the Aurora Borealis, Dr Tim Ball concludes:

The current debate attracting more and more people is that we are cooling with the only question left as to the extent and intensity. Will it be [the] weather similar to the cooler period coincident with the Dalton Minimum from 1790 – 1830? Alternatively, will it be colder with similar conditions to those by the early fur traders in Hudson Bay or those that spanned the life of Sir Edmund Halley? The appearance of Aurora in northern England suggests the latter, although I can predict who will protest this suggestion.

This is an interesting analysis of historical documents.  Read the full story HERE.

In the comments Leif Svalgaard offered this:

The sun sends us several ‘messages’ about its activity. One [beautiful] one is the aurora which has been observed since antiquity. I recently gave a seminar on those messengers:

The aurorae evidence is very difficult to calibrate. I have not studied Svalgaard’s paper yet but its looks very interesting.

Looking forward to your comments on  the questions: Is the auroral evidence of the next grand minimum and a little ice age?

In the 1990s, solar physicists, Penn and Livingston, called for a long decline in solar activity. This is the case and it is nice to see such work confirmed by events. Solar Cycles # 23 and 24 are the weakest since the early 1900s. The current run of consecutive Spotless Days is out to 33, or 75%, for the year.

[See Penn and Livingston paper and graphics below.]

So far this year, the count is out to 33 consecutive days, which is exceptional. So much so, that SILSO keeps a table of such long runs.

Solar Cycle # 24 is expected to reach its minimum by late in this year.

For hundreds of millions of years such changes in solar activity have been associated with changes from warming to cooling. And back again. The long run to the recent peak in activity was the strongest in thousands of years. Despite this, temperatures were not as warm for as long as set during the Medieval Warm Period. The end to that long trend and turn to cooling in the early 1300s was drastic, causing widespread crop failures and famine in Northern Europe and England. A book by William Rosen, “The Third Horseman” covers it thoroughly. The die-off from 1315 to 1320 is estimated at some 10 percent of the population. Deaths of cattle, sheep and horses were severe as well. All due to the turn to cold and unusually wet weather.

The change to what some are calling the Modern Minimum is significant. In geological perspective, it is now a built-in cooling force.

Rest of the Story HERE.

H/T Watts Up With That

I wrote some blog posts on Livingston and Penn in 2011. 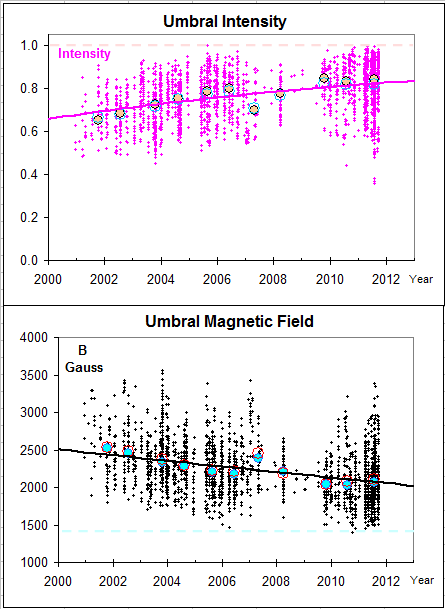 Here is a paper livingston-penn-2008

Coldest February on record in many communities, the first time in 130 years Los Angles never broke the 70 degrees mark in February. Phoenix shatters a 122-year-cold record. Monthly snowfall records being broken across the country.

The sun has just passed an entire calendar month with no sunspots. The last time this happened, in August 2008, the sun was in the nadir of a century-class Solar Minimum. The current stretch of blank suns shows that Solar Minimum has returned, and it could be as deep as the last one.

The last time a full calendar month passed without a sunspot was August 2008. At the time, the sun was in the deepest Solar Minimum of the Space Age. Now a new Solar Minimum is in progress and it is shaping up to be similarly deep. So far this year, the sun has been blank 73% of the time–the same as 2008.

Solar Minimum is a normal part of the solar cycle. Every ~11 years, sunspot counts drop toward zero. Dark cores that produce solar flares and CMEs vanish from the solar disk, leaving the sun blank for long stretches of time. These minima have been coming and going with regularity since the sunspot cycle was discovered in 1859.

My friend Anthony Watts does some analysis HERE and comes to this conclusion:

It seems the sun has dimmed more than the usual amount at the end of solar cycle 24, and it could be a factor in the severe winter we are experiencing in many parts of the northern hemisphere.

Your thoughts?  Could we be on the cusp of a major global cooling?