[Editors Note: The original link to this story has been updated. The story was pulled from Suite1o1.com. Details on why this story was removed from the Internet can be found HERE.]

Conventional wisdom and dodgy climate change models have been turned upside down. CO2 warming is not going to offset  the cold and misery of the Next Grand Minimum. Details at johnosullivan 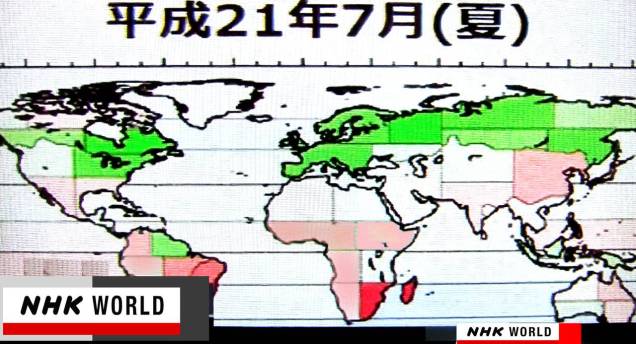 Global warming alarmism is turned on its head and the supposed role of carbon dioxide in climate change may be wrong, if the latest evidence from Japans scientists is to be believed.

Standing in front of a telling array of colorful graphs, sober-suited Yasuhiro Sasano, Director of Japans National Institute for Environmental Studies told viewers, “The [IBUKU satellite] map is to help us discover how much each region needs to reduce CO2 [carbon dioxide] emissions.

Indeed, the map at which JAXA spokesman Sasano was pointing see photo above had been expected by most experts to show that western nations are to blame for increases in atmospheric levels of carbon dioxide, causing global warming.

But to an officious looking TV interviewer Sasano turned greenhouse gas theory on its head.

According to UN science the greenhouse gas theory says more CO2 entering the atmosphere will warm the planet, while less CO2 is associated with cooling.Gesturing to an indelible deep green hue streaked across the United States and Europe viewers were told, “in the high latitudes of the Northern hemisphere emissions were less than absorption levels.”

Thus, the unthinkable could be made real: the greenhouse gas theory of climate change may collapse in the face of empirical evidence that industrialization is shown to have no link to global warming.

US solar physicists announced in June 2011 that the Sun appears to be headed into a lengthy spell of low activity, which could mean that the Earth—far from facing a global warming problem—is actually headed into a mini Ice Age. The announcement came from scientists at the US National Solar Observatory NSO and the US Air Force Research Laboratory. Three different analyses of the Sun’s recent behavior all indicated that a period of unusually low solar activity may be about to begin.

“This is highly unusual and unexpected,” said Dr. Frank Hill of the NSO. “But the fact that three completely different views of the Sun point in the same direction is a powerful indicator that the sunspot cycle may be going into hibernation.”

Fred Dardick reports, “We are in the midst of the convergence of three major solar,  ocean, and atmospheric cycles all heading in the direction of global cooling. Last year the Southern Hemisphere experienced its coldest winter in 50 years and Europe just went through two particularly cold winters in a row, and the cooling trend has just begun. The likelihood of a repeat of the great frost of 1709 is growing every day. 2  This was the time of the Maunder Minimum 1645-1715 and for periods either side of it, many European rivers which are ice-free today—including the Thames—routinely froze over, allowing ice skating and even for armies to march across them in some cases.

More recently other papers confirm that solar effects could bring on little ice ages. Sarah Ineson and her colleagues report that changes in the Sun’s emissions of ultraviolet radiation coincided with observed cold winters over southern Europe and Canada between 2008 and this year.

And Katja Matthes and colleagues report that simulations with a climate model using new observations of solar variability suggest a substantial influence of the Sun on the winter climate in the Northern Hemisphere.

Couple this with scientists saying an anticipated cold blast will be due to the return of a disruptive weather pattern called La Nina. Latest evidence shows La Nina, linked to extreme weather in America and with a knock-on effect on Britain, is in force and will gradually strengthen as the year ends. This climate phenomenon, characterized by unusually cold ocean temperatures in the Pacific, was linked to Britain’s icy winter last year—one of the coldest on record. “

However, the BBC when reporting on this story took great care to pay due respect to global warming orthodoxy with the statement, ‘The researchers’ emphasize there is no impact on global warming.’ Of course not- what can the sun possibly have to do with warming the planet?”

You can read article with References HERE.

The Berkeley Earth Surface Temperature (BEST) project has received a lot of interest in the lame stream press and on the lefty blogs making all kinds of claims the BEST press releases support human caused climate change.  Well yes, the plant is warming, but then again it has since the last ice age, with some ups during Medieval Warm Period and downs during the Little Ice Age.  The BEST project did not assess the cause of the warming, only that it has been warming from about 1977 to 2002.

My interest in the BEST results was that it confirmed the temperatures during the Dalton Minimum, our last Grand Minimum.

If you are interested in critiques of the BEST project look here:

Anthony Watts:  BEST: What I agree with and what I disagree with – plus a call for additional transparency to prevent “pal” review

While the focus is on the warming, in the last ten year the temperatures have been declining.

And we are beginning to see some of the early preliminary results, shorter grape growing seasons and extended ski seasons.   I say preliminary, because we are looking at only a few events, we need a longer period of a more positive assessment.

Dr Easterbrook writes in his PDF analysis of computer models of interest to the readers of this blog.

As for the skeptics predictions, mine were based on recurring climate cycles that can be traced back at least 400 years, long before CO2 could have been a factor. Using the concept that ‘the past is the key to the future,’ I simply continued the past, well- documented temperature patterns into the future and offered several possible scenarios beginning about 2000: (1) moderate, 25-30-year cooling similar to the 1945 to 1977 cooling, (2) more intense, 25-30-year cooling, similar to the more severe cooling from 1880to 1915, (3) more severe, 25-30-year cooling similar to the Dalton Minimum cooling from 1790 to 1820; or very severe cooling (the Little Ice Age) similar to the Maunder Minimum cooling from 1650 to 1700. So far, my cooling prediction, made in 1998, appears to be happening and is certainly far more accurate than any of the model predictions, which called for warming of a full degree F. So far cooling this past decade has been moderate, more like the 1945-1977 cooling, but as we get deeper into the present Grand Solar Minimum, the cooling trend may become more intense.

Here is a look at the current tread.

Now the question is, will this downward trend continue?

October 22, 2011 – SUMATRA, Indonesia –Several earthquakes have struck near south Sumatra of the 5.0 and 5.1 magnitude range today- making a tense situation on the volcanically-dotted archipelago potentially even more volatile. The Anak Krakatau volcano is showing signs of increased seismic activity. Authorities fear the volcano is building towards an eruption that could dwarf the one which occurred in 2007. Indonesia’s Volcanology and Geological Disasters Mitigation Center reported the numbers of seismic tremors now registering from the volcano have exceeded 5,000 a day. There are also reports of a gaseous mist which has seeped from the volcano and have enshrouded it in a yellowish haze- something that has never been observed at the volcano before. Anak Krakatau was placed on orange level 3 status alert on September 30, 2011.

via On the brink: Tremors increase at Anak Krakatau to 5,000 a day | The Extinction Protocol: 2012 and beyond.

How there is one of interest to vulcanologist in the southern hemisphere. Uturuncu is a 20,000-foot-high volcano in southwest Bolivia. Scientists recently discovered the volcano is inflating with astonishing speed. Details at Our Amazing Planet.

It is surrounded by one of the most dense concentrations of supervolcanoes on the planet, all of which fell silent some 1 million years ago.

Supervolcanoes get their name because they erupt with such power that they typically spew out 1,000 times more material, in sheer volume, than a volcano like Mount St. Helens. Modern human civilization has never witnessed such an event. The planet’s most recent supervolcanic eruption happened about 74,000 years ago in Indonesia. [Related: The 10 Biggest Volcanic Eruptions in History]

“These eruptions are thought to have not only a local and regional impact, but potentially a global impact,” de Silva said.

Uturuncu itself is in the same class as Mount St. Helens in Washington state, but its aggressive rise could indicate that a new supervolcano is on the way. Or not.

“So that’s why it’s important to know how long this has been going on,” he said.

To find an answer, scientists needed data that stretch back thousands of years — but they had only 20 years of satellite data.

A supervolcanoe could have a much larger impact than a grand minimum on the climate. Stay Tuned.

The issue of abrupt climate change is of interest to the Next Grand Minimum.  A solar minimum played a role in the on set of the Little Ice Age.

Larsen et al. performed multiple analysis of sediment cores of an Iceland glacial lake. The analysis clearly documents the robust climate change during the periods of the Dark Ages,the Medieval Warming and the Little Ice Age. The empirical evidence points to the extreme warmth of Icelands climate during the MWP and the extreme cold of the LIA.”A suite of environmental proxies in annually laminated sediments from Hvítárvatn, a proglacial lake in the central highlands of Iceland, are used to reconstruct regional climate variability and glacial activity for the past 3000 years…Varve thickness is controlled by the rate of glacial erosion and efficiency of subglacial discharge from the adjacent Langjökull ice cap…ice-cap expansion is punctuated by notable periods of rapid ice cap growth and/or landscape instability at ca 1000 BC, 600 BC, 550 AD and 1250 AD. The largest perturbation began ca 1250 AD, signaling the onset of the Little Ice Age and the termination of three centuries of relative warmth during Medieval times.Consistent deposition of ice-rafted debris in Hvítárvatn is restricted to the last 250 years, demonstrating that Langjökull only advanced into Hvítárvatn during the coldest centuries of the Little Ice Age.” [Darren J. Larsena, Gifford H. Millera, Áslaug Geirsdóttirb, Thorvaldur Thordarsonc 2011: Quaternary Science Reviews]

. . . have a look at the ensemble forecast, updated yesterday. The average line which has now dipped “off the scale” of the graphic from February-March of 2012:

via NCEP ensemble forecast shows deep La Niña coming | Watts Up With That?. 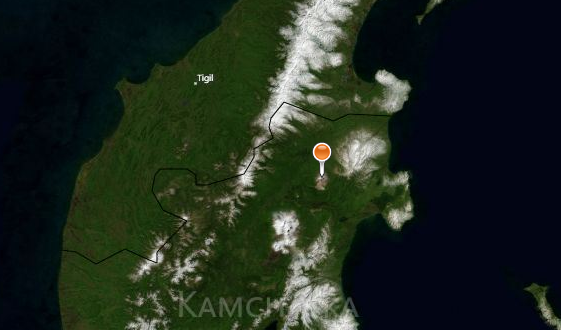 There are reports of a violent volcanic eruption of Mount Shiveluch on Russia’s Far Eastern Kamchatka Peninsula.

Smoke and ash from the volcano have climbed to 10 kilometres, sparking no-fly warnings for the surrounding area. Snow around the crater is rapidly melting, creating mudslides.

This eruption could have some winter weather impacts for California. Stay Tuned.