David Rose writes in the UK Daily Mail that we need to forget about global warming and worry about Solar Cycle 25. The UK Met office has released new figures showing no global warming for the last 15 years.

. . .  leading climate scientists yesterday told The Mail on Sunday that, after emitting unusually high levels of energy throughout the 20th Century, the sun is now heading towards a ‘grand minimum’ in its output, threatening cold summers, bitter winters and a shortening of the season available for growing food.

Solar output goes through 11-year cycles, with high numbers of sunspots seen at their peak.

We are now at what should be the peak of what scientists call ‘Cycle 24’ – which is why last week’s solar storm resulted in sightings of the aurora borealis further south than usual. But sunspot numbers are running at less than half those seen during cycle peaks in the 20th Century.

Analysis by experts at NASA and the University of Arizona – derived from magnetic-field measurements 120,000 miles beneath the sun’s surface – suggest that Cycle 25, whose peak is due in 2022, will be a great deal weaker still.

According to a paper issued last week by the Met Office, there is a  92 per cent chance that both Cycle 25 and those taking place in the following decades will be as weak as, or weaker than, the ‘Dalton minimum’ of 1790 to 1830. In this period, named after the meteorologist John Dalton, average temperatures in parts of Europe fell by 2C.  [My emphasis added]

However, it is also possible that the new solar energy slump could be as deep as the ‘Maunder minimum’ (after astronomer Edward Maunder), between 1645 and 1715 in the coldest part of the ‘Little Ice Age’ when, as well as the Thames frost fairs, the canals of Holland froze solid.  [My emphasis added]

Yet, in its paper, the Met Office claimed that the consequences now would be negligible – because the impact of the sun on climate is far less than man-made carbon dioxide. Although the sun’s output is likely to decrease until 2100, ‘This would only cause a reduction in global temperatures of 0.08C.’ Peter Stott, one of the authors, said: ‘Our findings suggest  a reduction of solar activity to levels not seen in hundreds of years would be insufficient to offset the dominant influence of greenhouse gases.’

These findings are fiercely disputed by other solar experts.

‘World temperatures may end up a lot cooler than now for 50 years or more,’ said Henrik Svensmark, director of the Center for Sun-Climate Research at Denmark’s National Space Institute. ‘It will take a long battle to convince some climate scientists that the sun is important. It may well be that the sun is going to demonstrate this on its own, without the need for their help.’

He pointed out that, in claiming the effect of the solar minimum would be small, the Met Office was relying on the same computer models that are being undermined by the current pause in global-warming.

You can read the rest of the article HERE.  In the past when the sunspots declined or vanished, the earth got colder.  The scientific evidence indicated that sunspots are declining and they  may disappear. Stay Tuned.

In a guest post by David Archibald at Watts Up With That he suggest based on the current data that we are about to see the end of the Modern Warm Period. See the details HERE. 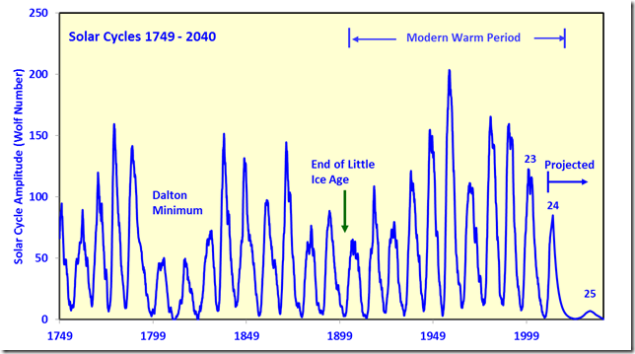 Here is the lastest recorded low temperature from a NASA satellite.  The violet line is 2011. 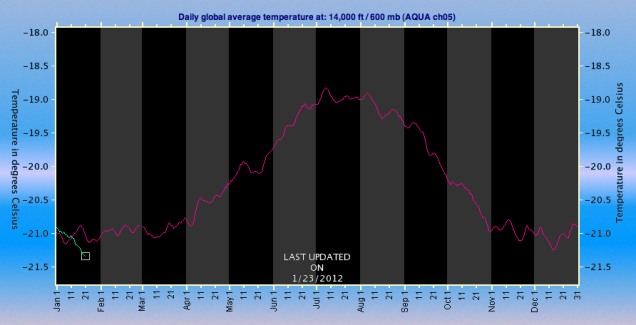 The lowest recorded by satellite was was in 2008 and we are now below that level:

You can do you own plots HERE. 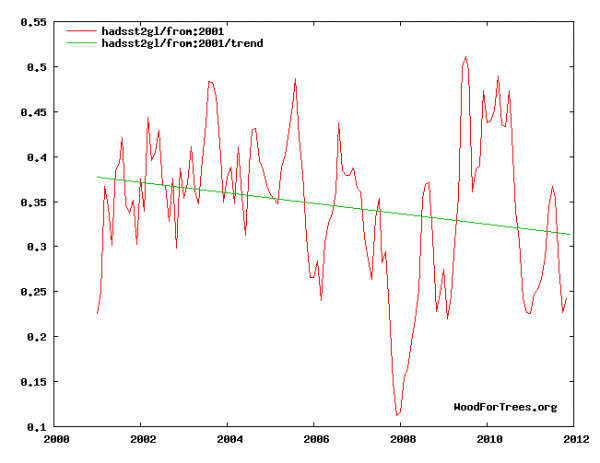 The trend is especially strong in the southern hemisphere. 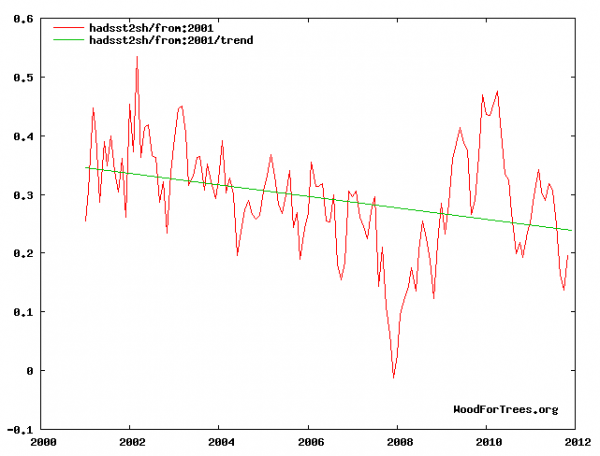 via Sea Surface Temperatures declining over past decade « Reasonable Doubt on Climate Change.

The question is, are these indicators of a longer term cooling.  Stay Tuned.

David Archibald had a guest post at Watts Up With That this morning that is of interest to those concerned with the Next Grand Minimum. He makes the case that Solar Cycle 24 will be longer than unusual and result in a decline in growing season in the gain belt.  Less grain will have an economic impact on this nation and those dependent on Norther Hemisphere grain for subsistence .

Has a fall of that magnitude happened in that time frame happened in the past? A good place to look is the Dye 3 temperature record from the Greenland Plateau, available here: ftp://ftp.ncdc.noaa.gov/pub/data/paleo/icecore/greenland/gisp/dye3/dye3-1yr.txt

There is plenty of noise in this record and rapid swings in temperature, for example the 5.2°C fall from 526 to 531 at the beginning of the Dark Ages. [ Note there was major volcano eruptions during this period between 536 to 531, not mentioned in the text.]

Averaging the Dye 3 temperature record using the 22 year length of the Hale Cycle produces a lot of detail. What is evident is that there has been a very disciplined temperature decline over the last four thousand years. The whole temperature record is bounded by two parallel lines with a downslope of 0.3°C per thousand years. The fact that no cooling event took the Dye 3 temperature below the lower bounding green line over nearly four thousand years is quite remarkable. It implies that solar events do not exceed a particular combination of frequency and amplitude. From that it can be derived that this particular combination of frequency and amplitude with be ongoing – that is that cooling events will happen just as frequently as they did during the Dye 3 record.

The relationship between temperature and growing conditions at about the latitude of the US – Canadian border is that one degree C will shift growing conditions by about 140 km. With a total 4.9°C temperature decline in train, that means a shift of about 700 km. Figure 6 shows the result of that temperature decline. Witchita will end up with the climate of Sioux Falls, which in turn will be like Saskatoon now. The growing season loses a month at each end.

via Ap Index, Neutrons and Climate | Watts Up With That?.

I am tracking the changes in the length of the growing season in the grain belt on this blog. Stay tuned! 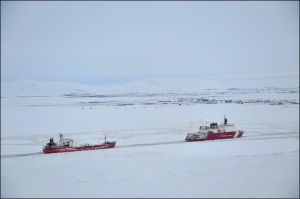 If you have been watching the news, you have seen the Russian Tanker struggling to bring fuel to Nome. The Nome Nugget has some insight into how all that ice got so thick, requiring a Coast Guard Ice Breaker to lead the way to Nome.

The Nome post of the National Weather Service reported that Nome reached a temperature of -40oF for the first time in almost 13 years on Thursday, January 5. The last time Nome recorded -40oF without windchill was on February 1, 1999. Bob Ten Eyck, meteorologist with the NWS in Nome said the low on Sunday still recorded a -30oF, making it 12 consecutive days of the 30-below-cold-snap. He said that the normal temperature for January is 13oF and the normal low is -3oF.

This stretch of inclement weather was never before seen in the entire “105-years of climatological history in Nome.”

This raises the question, is this just the beginning of long term cooling, or just another short term weather anomaly?  Stay Tuned!

This is a question that has been rolling around in my mind for some time, as I looked for links between solar minimums and maximums and earthquake activity.  I guess there is nothing to find according to a paper by Peter Shearer and Philip Stark in PNAS.

Global risk of big earthquakes has not recently increased

The recent elevated rate of large earthquakes has fueled concern that the underlying global rate of earthquake activity has increased, which would have important implications for assessments of seismic hazard and our understanding of how faults interact. We examine the timing of large (magnitude M≥7) earthquakes from 1900 to the present, after removing local clustering related to aftershocks. The global rate of M≥8 earthquakes has been at a record high roughly since 2004, but rates have been almost as high before, and the rate of smaller earthquakes is close to its historical average. Some features of the global catalog are improbable in retrospect, but so are some features of most random sequences—if the features are selected after looking at the data. For a variety of magnitude cutoffs and three statistical tests, the global catalog, with local clusters removed, is not distinguishable from a homogeneous Poisson process. Moreover, no plausible physical mechanism predicts real changes in the underlying global rate of large events. Together these facts suggest that the global risk of large earthquakes is no higher today than it has been in the past.

Guest post by David Archibald at Watts Up With That

Solar Cycle 24 is now three years old and predictions of the date of solar maximum have settled upon mid-2013. For example, Jan Janssens has produced this graph predicting the month of maximum in mid-2013, which is 54 months after the Solar Cycle 23/24 minimum in December 2008: 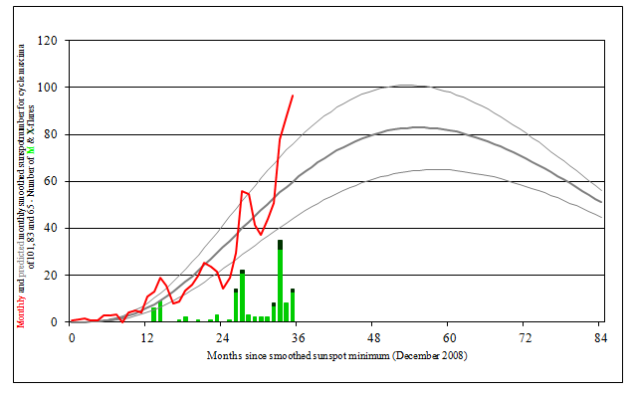 For those of us who wish to predict climate, the most important solar cycle attribute is solar cycle length. Most of the curve-fitting exercises such as NASA’s place the next minimum between 2020 and 2022 (eg: http://wattsupwiththat.com/2011/11/06/nasas-november-solar-prediction/). Solar minimum in December 2022 would make Solar Cycle 24 fourteen years long, which in turn would make the climate of the mid-latitudes over Solar Cycle 25 about 1.0°C colder than the climate over Solar Cycle 24.

You can read the rest HERE. I found this rather interesting:

It is looking like Cycles 24 and 25 are going to be longer than normal. The questions is will this result be a cooler earth?

While we are basking in a warm winter in California, with all the TV talking heads worrying if we will see any snow at all, much of the nation is getting frost bite. Soon it will be our turn. 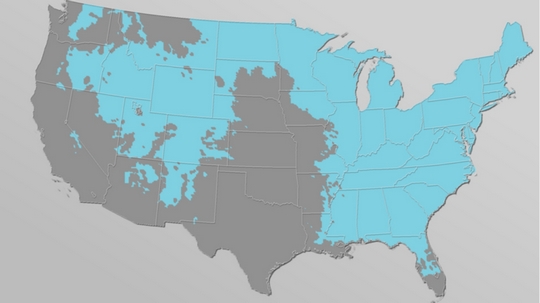 A blast of cold arctic air swept over the U.S. starting on New Year’s Day and has kept a large part of the county in sub-freezing temperatures. Plotted on this image in blue, using data from the NOAA North American Model, are areas of the U.S. predicted to have temperatures at some point in the day that are below freezing (32° F) on January 4, 2012.

I have posted earlier versions of this chart prepared by Joe Bastardi. Here is an update with more concrete evidence of regional cooling over the last ten years. 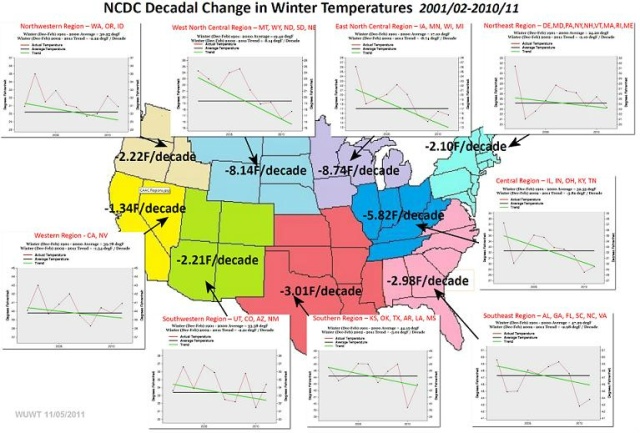