Full Details at Watts Up With That

NASA went searching for micro black holes in Antarctica. Instead, it detected cosmic rays shooting from the ground and some physicists think it could be evidence of a supersymmetric particle.

If Cosmic Rays from space can influence the amount of cloud cover, thus impacting the earth’s temperature, what is the impact of cosmic rays shooting from the earth? Cloud formation impact?  Stay Tuned

This is from the SpaceWeather.com

The sun is entering one of the deepest Solar Minima of the Space Age. Sunspots have been absent for most of 2018, and the sun’s ultraviolet output has sharply dropped. New research shows that Earth’s upper atmosphere is responding.

“We see a cooling trend,” says Martin Mlynczak of NASA’s Langley Research Center. “High above Earth’s surface near the edge of space, our atmosphere is losing heat energy. If current trends continue, the upper atmosphere could soon set a Space Age record for cold.”

These results come from the SABER instrument onboard NASA’s TIMED satellite. SABER monitors infrared emissions from carbon dioxide (CO2) and nitric oxide (NO), two substances that play a key role in the energy balance of air 100 to 300 kilometers above our planet’s surface. By measuring the infrared glow of these molecules, SABER can assess the thermal state of gas at the very top of the atmosphere–a layer researchers call “the thermosphere.”

“The thermosphere always cools off during Solar Minimum. It’s one of the most important ways the 11-year solar cycle affects our planet,” explains Mlynczak, the associate principal investigator for SABER.

When the thermosphere cools, it shrinks, literally decreasing the radius of the atmosphere. This shrinkage decreases aerodynamic drag on satellites in low-Earth orbit, extending their lifetimes. That’s the good news. The bad news is, it also delays the natural decay of space junk, resulting in a more cluttered environment around Earth. 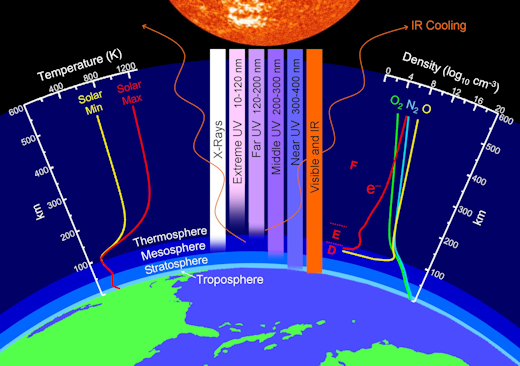 To help keep track of what’s happening in the thermosphere, Mlynczak and colleagues recently introduced the “Thermosphere Climate Index” (TCI)–a number expressed in Watts that tells how much heat NO molecules are dumping into space. During Solar Maximum, the TCI is high (“Hot”); during Solar Minimum, it is low (“Cold”).

“Right now, it is very low indeed,” says Mlynczak. “SABER is currently measuring 33 billion Watts of infrared power from NO. That’s 10 times smaller than we see during more active phases of the solar cycle.”

Although SABER has been in orbit for only 17 years, Mlynczak and colleagues recently calculated TCI going all the way back to the 1940s. “SABER taught us to do this by revealing how TCI depends on other variables such as geomagnetic activity and the sun’s UV output–things we have been measuring for decades,” he explains. The historical record shows a strong correlation between TCI and the solar cycle: 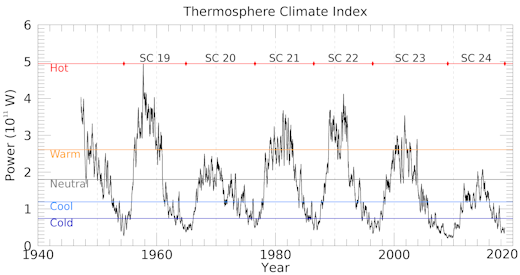 As 2018 comes to an end, the thermosphere is on the verge of setting a Space Age record for Cold. “We’re not there quite yet,” says Mlynczak, “but it could happen in a matter of months.”

Soon, the Thermosphere Climate Index will be added to Spaceweather.com as a regular data feed, so our readers can monitor the state of the upper atmosphere just as researchers do. Stay tuned.

Willie Soon, PhD, Independent Scientist, on August 25, 2018, at the 36th annual meeting of Doctors for Disaster Preparedness Las Vegas gave a presentation on the Spore Minimum and in the presentation predicted the next Grand Minimum. Here is his graphic: 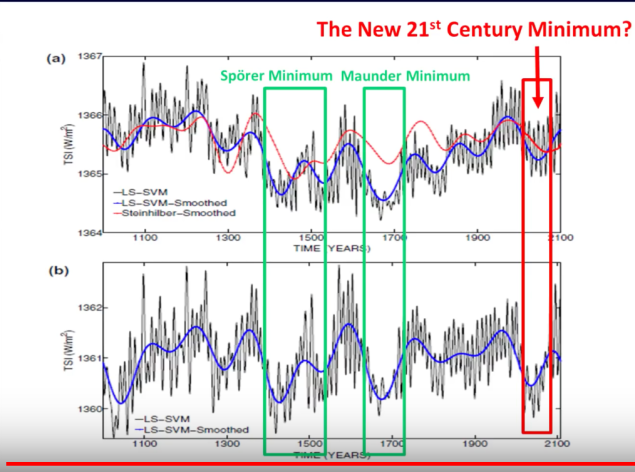 Link to video is HERE.

Andy May has an excellent article at Watt’s Up With That. He asks the question and then examines the issue.

Do we know the solar output, over the past 261 years, accurately enough to say the Sun could not have changed 9.2 W/m2 or some large portion that amount? In other words, is the IPCC assumption that solar variability has a very small influence on climate valid?

In answer to the question posed at the beginning of the post, no we have not measured the solar output accurately enough, over a long enough period, to definitively say solar variability could not have caused all or a significant portion of the warming observed over the past 261 years. The most extreme reconstruction in Figure 7 (Lean, 2000), suggests the Sun could have caused 25% of the warming and this is without considering the considerable uncertainty in the TSI estimate. There are even larger published TSI differences from the modern day, up to 5 W/m2 (Shapiro, et al. 2011), (Soon, Connolly and Connolly 2015) and (Schmidt, et al. 2012). We certainly have not proven that solar variability is the cause of all or even a large portion of the warming, only that we cannot exclude it as a possible cause, as the IPCC appears to have done.

Read the full analysis How Constant is the Solar Constant HERE.

Katla, a giant volcano hidden beneath the ice cap of Mýrdalsjökull glacier, is busy filling its magma chambers, new research confirms. An eruption in Katla would dwarf the 2010 Eyjafjallajökull eruption, scientists have warned. The volcano is long “overdue” for an eruption, as it has historically erupted once every 40-80 years. The last known eruption in Katla was in 1918.

A group of Icelandic and British geologists have recently finished a research mission studying gas emissions from the volcano. The studies showed that Katla is emitting enormous quantities of CO2. The volcano releases at least 20 kilotons of C02 every day. Only two volcanoes worldwide are known to emit more CO2, Evgenia Ilyinskaya a volcanologist wit with the University of Leeds told the Icelandic National Broadcasting Service RÚV.

These enormous CO2 emissions confirm significant activity in the volcano, Evgenia told RÚV: “It is highly unlikely that these emissions could be produced by geothermal activity. There must also be a magma build up to release this quantity of gas.”

Rest of the article is HERE.

Iceland has at least 30 active volcanic systems, all of which are under constant observation by scientists. The four most active volcanoes and volcanic systems in Iceland are Bárðarbunga and Grímsvötn both of which are located beneath Vatnajökull glacier, Katla, which is hidden under Mýrdalsjökull glacier and the cone volcano Hekla in South Iceland. Each has shown signs of growing activity in the past few months a geophysicist Páll Einarsson told the local newspaper Fréttablaðið.

What is the connection between solar minimum and volcanic activity?

New research by US scientists has detected that the Sun is emitting a higher than expected amount of high-energy light consisting of gamma rays. But the most unusual thing is that the rays with the highest energy appear when the star is at its least active point, according to the study, which is published in the journal Physical Review Letters.

The work is the first investigation that has examined gamma rays over most of the solar cycle, a period of about 11 years during which the activity of the star increases and decreases.

The group of scientists, led by astrophysicist Tim Linden, analyzed data that NASA’s Fermi Gamma-ray space telescope collected between August 2008 and November 2017. The observations included a period of low solar activity in 2008 and 2009, a period of greatest activity in 2013 and a reduction in activity to the minimum before the start of a new cycle in 2018.

The team tracked the number of solar gamma rays emitted every second, as well as their energies and where they came from.

The team reported that during the years analyzed, the number of gamma rays emitted was so high (more than 50,000 million electron volts, or GeV) that all predictions were exceeded. However, interestingly, rays with energies above 100 GeV appeared only during the minimum solar activity.

Even rarer is that the Sun seems to emit gamma rays from different parts of its surface at different times of the cycle. During the solar minimum, gamma rays came mainly from an area near the equator, while during solar maximum, when the level of the star’s activity was high, the rays were grouped near the poles. [Emphasis added]

All this is much rarer than predicted, said the astrophysicist John Beacom of Ohio State University in Columbus.

The scientist stressed that this unusual activity could mean that the Sun’s magnetic fields are much more powerful, much more variable and have a much stranger shape than we expected.

In addition, the expert stressed that high-energy gamma rays can offer new possibilities for the study of magnetic fields in the upper layer of the solar surface, called the photosphere.

Fields cannot be seen with a telescope, says Beacom. “But cosmic rays that travel there and the gamma rays they send are messengers of the terrible conditions that exist in the photosphere, said the scientist.

My question is what does this mean for us on the planet earth? See the highlighted text. If during the minimum the gamma rays come from near the equator, we should detect more on earth as opposed to those emitted at the poles. When a gamma ray strikes the top of the atmosphere, it initiates a cascade of particles, which in turn produces a flash of blue light. How could an increase in gamma rays impact our climate during solar minimum? Cosmic rays produce the same Compton scattering and are thought to increase cloud cover. Thoughts?