One of the signs that we are on the cusp of the Next Grand Minimum is an increase in the number late spring frosts and early on set of winter frost and snow.

The Bonsetreporting world wine production ‘to hit 50-year low due to extreem weather, even though they failed to mention it was due to severe spring frost.

Here are estimates of the drops in wine production by country:

• Spanish production will be 15% lower at 33.5 million hectolitres.

The BBC may blame ‘extreme weather,’ but back in August the French agriculture minister presented a more honest picture, saying that the losses were “mainly attributable to the severe spring frost.”

Switzerland, Austria, Germany and Hungary also experienced hard frosts this year, and were worried that wine harvests could fall by 30%, even up to 60% in some areas.

IceAge Now Has this story and some data on the broken records:

Residents are calling it ‘Springter,’ a mix of spring weather and stubborn winter conditions in what seems to be like a never ending winter.

On Monday, temperatures in Saskatoon plunged to minus 15.4C, breaking the previous record of minus 15.0C set in 1893.

The bitterly cold air over central Saskatchewan resulted in several low temperature records, including Regina and Assinibola, which both broke records set in 1948. Meanwhile, Kindersley broke a record set in 1942.

Putting a hold on spring planting

“I’m ready to get on with spring and do my spring planting, so this colder weather is putting a hold on everything,” said one Calgarian.

“In some places, daytime highs will remain far below seasonal,” says Brian Dillon, a meteorologist at The Weather Network.
http://www.theweathernetwork.com/news/storm_watch_stories3&stormfile=
Record_cold_grips_the_Prairies_09_04_2013?ref=ccbox_homepage_topstories

In one year late spring planting can be a small set back, but if spring planting is delayed year after year then we have a serious problem, and a strong indicator we are on the way to the next grand minimum.

Swept away by global warming climate change hysteria, governments are not ready for crop failures and shorter growing seasons of global cooling, foreshadowed by low solar activity. Though NASA is currently reporting a massive sunspot, solar cycle 24, our current phase, has been half as active as previous cycles suggesting another imminent Little Ice Age that could devastate food production for decades.

ZeroHedge has some scary charts showing the demand for food is rising inexorably (as is the demand for fuel) but at the same time supply is falling rapidly as the availability of arable land per capita plunges.

The result in that food prices are rising 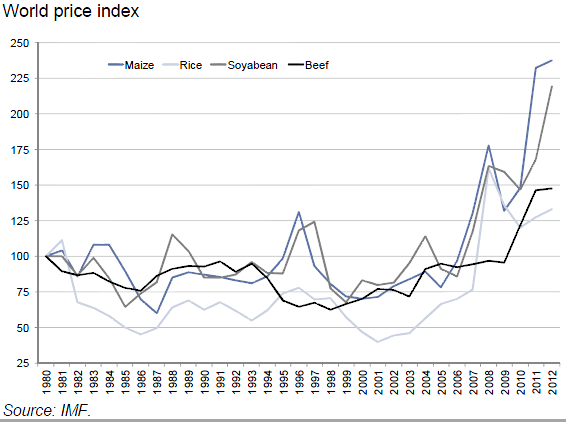 If the food supply is declining for an increasing population, forcing up prices during a relatively warm period, what will happen when the next grand minimum arrives?

That will be the scariest of all divergences. Increasing demand when the climate is curtailing production.

Historically grand minimums have resulted in colder and stormy weather, reducing the length of the growing season with late spring frosts and early fall frosts. The result is a shorter growing season for some areas, in other cases the historical crops cannot be grown at all.  For example,  Canada’s grain growing areas will move south with every degree decline in the global temperature as shown in the this David Archibald graphic. 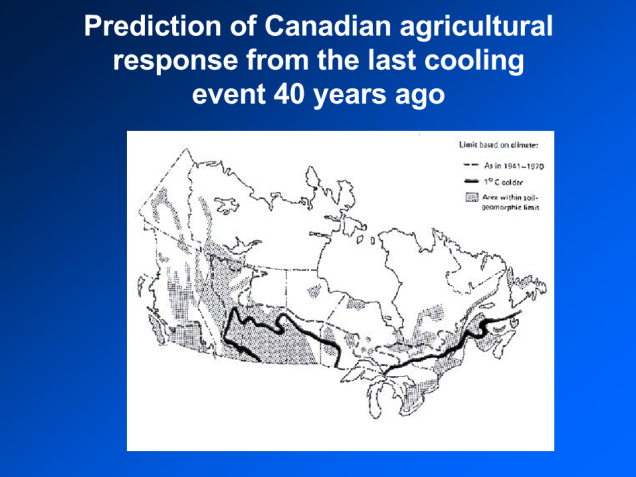 In my estimate, this is the scariest of all divergences, yet our political leaders are preparing for a warming climate and are demanding that we burn critical food sources in our vehicles.  This is unsustainable  stupidity!

[Editor Note:  This is a long and important post by David Archibald at WUWT.  I will be posting some of the graphics under the Wheat Tab above next week with my comments.] 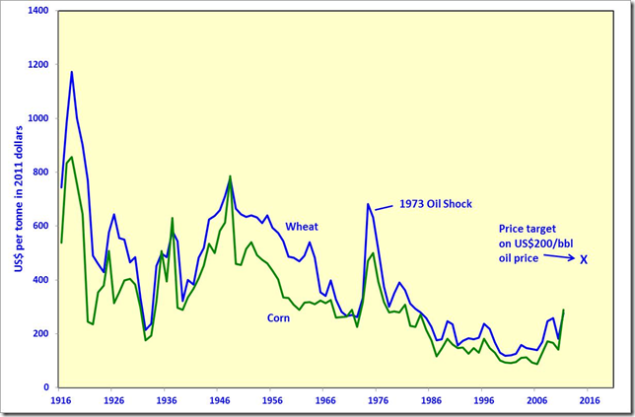 Grain prices fell 70% in constant dollar terms from the Korean War to the end of the 20th century. In 2008, energy-related inputs relative to total operating expenses were about 60% for both wheat and corn. A $200 per barrel oil price will raise operating costs by 60% from the 2008 level. A similar price response was experienced during the First Oil Shock of 1973. This time the price increase will be permanent.

via Watts Up With That?.

Joel Kotkin takes a look at Rick Perry’s influence on Texas’ economic success in an article that first appeared in Forbes. Link to the full article is here.

The part of Kotkin’s article that I found most interesting was the role of the energy sector in job Texas creation.  California is desperate to turn it’s growing unemployment around, but is unwilling to follow the Texas example.  Yes, Texas has benefited from higher energy prices, but in California the opposite it true, higher energy cost are reducing employment.  Companies are moving to Texas.

To be sure, Texas has benefited from higher energy prices, as Perry’s detractors point out. According to an analysis by the EMSI economic forecasting group, the energy sector jumped from over 230,000 jobs in 2001 to just under 490,000 in 2011. That’s roughly 10% of all the state’s overall job gains. This parallels job growth in other states that have experienced surges in energy-related employment — such as North Dakota and Wyoming.

But some of this has to do with making your own “luck.” Energy-rich California has all but declared war on its fossil fuel industry, once one of the nation’s most important. Instead, the state has placed lavish bets on renewable fuel and the much ballyhooed notion that “green jobs” could provide a massive base for new employment — something even the green-friendly New York Times has called “a pipe dream.” In fact, employment in this field has actually started to tick down, and the prospect of ever higher energy prices associated with “clean” fuels could prove another nail in California’s economic coffin.

What does all this have to do with the Next Grand Minimum? California is investing huge sums in “green energy” and “clean fuels” that are designed to reduce CO2, all to satisfy environmentalist who are trying to save the planet from global warming. Yet, the planet is not warming and we are spending billions that will be needed to deal with a decline in agriculture production,  resulting from shorter growing seasons as we enter The Next Grand Minimum. If California has a robust economy, we will be better prepared to deal with the problem created by cooling world. Drill baby dril!

I recommend that you read all to the Kotkin article here.

I have updated the Fuel Page.  For the past seven weeks diesel prices in Nevada County have been stable while prices in the US and California have been declining. Why?  Your thoughts?

The California Air Resources Board voted Monday the 22nd of August to proceed with it’s cap and trade program in California. The global carbon market has collapsed and they will be in the market alone in a naked attempt to extort $30-40 dollars a ton from California business that generate CO2.

When the Chicago Carbon Exchange closed carbon was selling for less than a nickel ton.  All the states originally recruited to be in the Western Climate Initiative and participate in carbon trading have with drawn, except for two Canadian Providences that may participate someday.

Compliance with the cap-and-trade program has been pushed back a year and is now set to begin in 2013.   By then we will be coming close to solar maximum for Solar Cycle 24, and maybe we will have some new faces in Sacramento who will have enough spine to reign in CARB.

As the planet cools during the next grand minium, there will be long cold winters when citizens will need to warm their homes and shelters. Having access to low cost energy sources will be key to survival for many low income families.  It appears that the US has the necessary cheap energy resources, unless our political leader block the development and drilling of US unconventional oil and gas resources.

Amy Myers Jaffe writing in the Sept/Oct 2011 issue of Foreign Policy, Sept/Oct 2011 assess the current supply of fossil energy available to US consumers.

Geologists have long known that the Americas are home to plentiful hydrocarbons trapped in hard-to-reach offshore deposits, on-land shale rock, oil sands, and heavy oil formations. The U.S. endowment of unconventional oil is more than 2 trillion barrels, with another 2.4 trillion in Canada and 2 trillion-plus in South America — compared with conventional Middle Eastern and North African oil resources of 1.2 trillion. The problem was always how to unlock them economically.

But since the early 2000s, the energy industry has largely solved that problem. With the help of horizontal drilling and other innovations, shale gas production in the United States has skyrocketed from virtually nothing to 15 to 20 percent of the U.S. natural gas supply in less than a decade. By 2040, it could account for more than half of it. This tremendous change in volume has turned the conversation in the U.S. natural gas industry on its head; where Americans once fretted about meeting the country’s natural gas needs, they now worry about finding potential buyers for the country’s surplus.

Meanwhile, onshore oil production in the United States, condemned to predictions of inexorable decline by analysts for two decades, is about to stage an unexpected comeback. Oil production from shale rock, a technically complex process of squeezing hydrocarbons from sedimentary deposits, is just beginning. But analysts are predicting production of as much as 1.5 million barrels a day in the next few years from resources beneath the Great Plains and Texas alone — the equivalent of 8 percent of current U.S. oil consumption. The development raises the question of what else the U.S. energy industry might accomplish if prices remain high and technology continues to advance. Rising recovery rates from old wells, for example, could also stem previous declines. On top of all this, analysts expect an additional 1 to 2 million barrels a day from the Gulf of Mexico now that drilling is resuming. Peak oil? Not anytime soon.

You can read the rest of the article here. Our local sustainability groups have focused on the threat of peak oil, while ignoring the possibility of cooling resulting from a grand minimum. Peak oil is a long way off, while we are on the cusp of The Next Grand Minimum.