Are we on the cusp of another mini-ice age? This is only one event, the question is will we break a record again next year and the years after. Stay tuned.

Are we on the cusp of another mini-ice age? This is only one event, the question is will we break a record again next year and the years after. Stay tuned.

WAITING for solar fireworks to reach a grand finale next year? Um, sorry, looks like you already missed them. Structures in the sun’s corona indicate that the peak in our star’s latest cycle of activity has been and gone, at least in its northern hemisphere.

The southern hemisphere, meanwhile, is on a sluggish rise to solar maximum and may not hit its peak until 2014.

This bizarre asymmetry strengthens a theory that has been bubbling among sun watchers for the past few years: our star is headed for hibernation. Having the sun’s outbursts turned off for a while would provide a better baseline for studying how they influence Earth’s climate.

Observations of magnetic footprints called sunspots revealed in the 1800s that the sun moves through a roughly 11-year cycle of activity. Around a solar maximum, the star ramps up production of sunspots, flares and ejections of plasma. During a solar minimum, things quieten down.

Following an unexpectedly deep minimum from 2008 to 2010, solar physicists predicted a weak maximum for 2013. These days, though, sunspots aren’t the only tools for charting the solar cycle. Richard Altrock of the US Air Force Research Laboratory in New Mexico has been studying coronal structures called polar crown prominences, which stem from magnetic rumblings on the sun’s surface.

These gaseous filaments form at mid-latitudes at the beginning of a solar cycle. As it progresses they drift polewards, and when they reach 76 degrees latitude, a solar maximum has arrived. Soon afterwards the prominences disappear, only to form again during the next cycle.

Based on the movements of this cycle’s prominences, Altrock says that an especially weak solar maximum took place in the sun’s northern hemisphere around July last year (arxiv.org/abs/1209.2969).

Bernhard Fleck, project scientist for NASA’s and the European Space Agency’s Solar and Heliospheric Observatory, calls the paper solid work, but adds that even if we missed the northern maximum, the southern hemisphere is still expected to put on a show.

According to Altrock, the southern prominences are still on the move, but slowly. If they continue at the current rate, he says, the south will not reach its maximum until February 2014.

Such a large asymmetry between hemispheres could be a sign of big changes ahead, says Steven Tobias, a mathematician at the University of Leeds, UK, who models what drives the sun’s magnetic field. According to his models, such a situation precedes an extended quiet phase called a grand minimum. “Changes in symmetry are more indicative of going into a grand minimum than the strength of the cycle,” he says.

Grand minima can last for decades. The previous one took place between 1645 and 1715, and has been linked to the little ice age in Europe. A new one might also cause localised cold periods. Climate scientists might see a silver lining to being plunged into a deep freeze: a grand minimum offers ideal conditions for testing the effects of solar variability on Earth’s climate (see “Our star’s subtle influence”).

But Michael Proctor, a solar physicist at the University of Cambridge, is not convinced that this will happen. “This present cycle is similar to the weak one that ended in 1913, and that was followed by a strong cycle,” he says.

Only time will tell.

There was some other records broken in Many other record low temps in MN, NE, SD, IN, IL, WI, IA and MO. 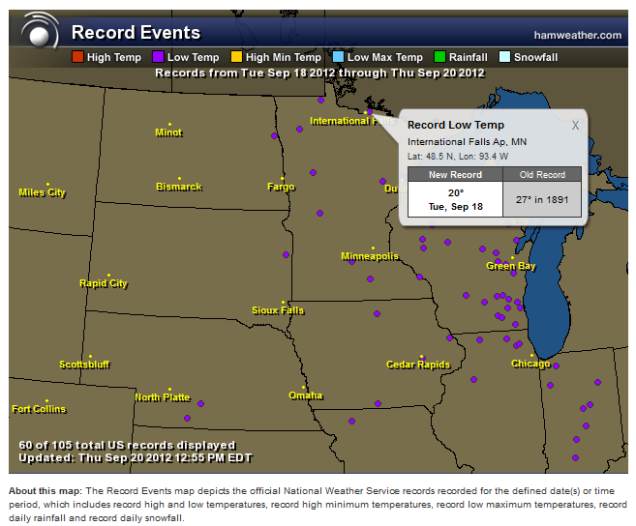 AccuWeather has the story ” 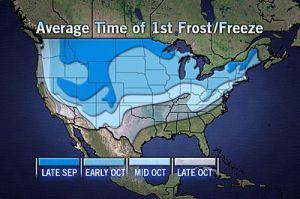 Temperatures are forecast to dip to frosty levels across much of Wisconsin and portions of Illinois and northeastern Missouri Tuesday night into early Wednesday morning.

If you live in open areas over the suburbs or the countryside from Chicago and Milwaukee to Madison, Wis., and St. Louis and you have tender flowers or vegetable plants, cover them Tuesday evening or risk damage from frost.

The average date of the first frost in Chicago occurs during the middle of October but has occurred as early as the middle of September.

Yes, this is just weather! However, it could also be a data point for a continuing trend. Stay Tuned.

David Archibald offeres readers good advice on where we should focus our attention, on vanishing sunspots and year to year snow accumulation.

Baby boomers like me have enjoyed the most benign period in human history. The superpower nuclear standoff gave us fifty years of relative peace, we had cheap energy from inherent over-supply of oil, grain supply increased faster than population growth and the climate warmed due to the highest solar activity for 8,000 years. All those trends are now reversing. But it will get much worse than that. The next glaciation will wipe out many countries and nothing will stop that from happening. For example, the UK will end up looking like Lapland. As an indication of just how vicious it is going to get, consider that there are rocks on the beaches of Scotland that got blown over on ice from Norway across a frozen North Sea. As scientists, our task is to predict the onset of the next glaciation.

Onset of interglacials is driven…

I found this paper’s abstract most interesting and decided to do a little research on the Barycenter and were we are today in the cycle and where it was during the Maunder Minimum.

From the Hockey Schtick:

A paper published today in the Journal of Atmospheric and Solar-Terrestrial Physics finds the ice winter severity index over the past 600 years in the Baltic region of the Arctic is “strongly modulated” by solar activity over periods as short as one decade. The authors also found that the 180 year cycle of the Barycenter modulates solar activity and the ice winter severity index. The full abstract can be found HERE.

I found this on the Terra Cycles web site:  Solar Barycenter Update June 17, 2010 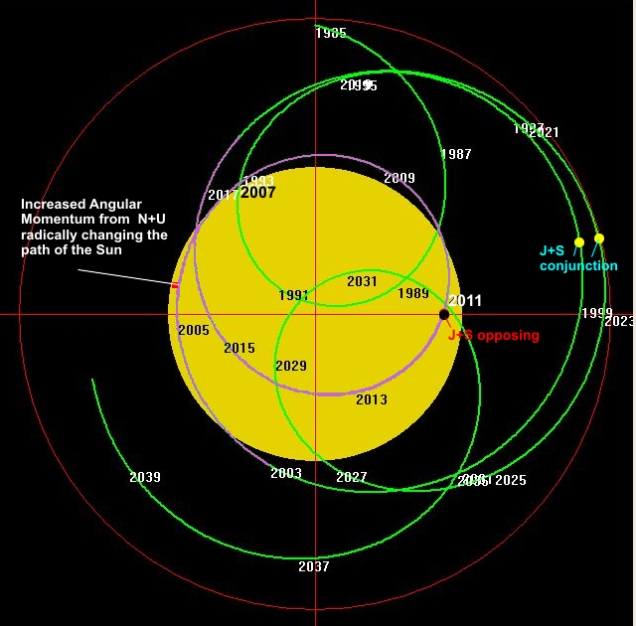 At this time, the solar barycenter is transiting the Sun’s surface in a tighter formation than it has in over 6000 years; even more so than prior to the Maunder Minimum in the 1600s.  This is a significant solar event. [My emphasis]

This is a survivable event, to be sure.  It happens regularly in cosmic time.  However, a barycenter transit over the Sun’s surface for such a long time will significantly cool the Sun.  In the next 150 years, future solar barycenter transits will slow down the recovery of the present quiet period.  As a result, we are likely to experience about 150 years of solar minimum punctuated by a few false starts.  This will translate to about 150 years of cool weather on Earth before solar activity returns to the level seen in the 1900s.

There was a paper published by the Astronomical Journal in April, 1965 ( vol. 70, page 193) by Paul D. Jose which described just such an effect. He noted that the Sun and planets orbit about a point called the barycenter of the solar system which is located between 0.01 and 2.2 times the radius of the Sun from the Sun’s center. The path of the Sun is actually a loop-de-loop about this point which doesn’t close upon itself like an ordinary planetary orbit. Jose discovered that although this motion is complicated, the Sun returns to roughly its starting position with respect to this point every 179 years, which he noted is 9 times the synodic period of Jupiter and Saturn. This means that every 179 years as seen from the Sun, Jupiter and Saturn return to the same spot in the sky. He looked at the sunspot record from 1610 to 1954 and found evidence of this same period in the maxima and minima of the 11 year sunspot cycle. In other words, superimposed upon the 11-year cycle, there was a 179 year modulation of the amplitudes of each cycle. This modulation matched the phase of the rate of change in time of the Sun’s angular momentum (dL/dt) with respect to the barycenter. He concluded that “Certain forces exerted upon the Sun by the planets are the cause of the sunspot cycle”

I found this on the Tallbloke’s web site in a discussion of Barycenter impacts that shows the current Barycenter rotation is very similar to that of the Maunder Minimum.

There are interesting times ahead. Stay Tuned.

A new paper published in Geophysical Research Letters indicates that “Temperature trends in Southwest US have been relatively stable over last 5 centuries” and that there has been “no sustained monotonic rise in temperature or a step-like increase since the late 19th century.”  This would imply that there has been no significant influence of man-made CO2 on temperatures of the Southwest US. It would also indicate that Dalton Minimum was not a major factor in the regions climate variability.

Pre-instrumental surface temperature variability in the Southwestern United States has traditionally been reconstructed using variations in the annual ring widths of high altitude trees that live near a growth-limiting isotherm. A number of studies have suggested that the response of some trees to temperature variations is non-stationary, warranting the development of alternative approaches towards reconstructing past regional temperature variability. Here we present a five-century temperature reconstruction for a high-altitude site in the Rocky Mountains derived from the oxygen isotopic composition of cellulose (δ18Oc) from Bristlecone Pine trees. The record is independent of the co-located growth-based reconstruction while providing the same temporal resolution and absolute age constraints. The empirical correlation between δ18Oc and instrumental temperatures is used to produce a temperature transfer function. A forward-model for cellulose isotope variations, driven by meteorological data and output from an isotope-enabled General Circulation Model, is used to evaluate the processes that propagate the temperature signal to the proxy. The cellulose record documents persistent multidecadal variations in δ18Oc that are attributable to temperature shifts on the order of 1°C but no sustained monotonic rise in temperature or a step-like increase since the late 19th century. The isotope-based temperature history is consistent with both regional wood density-based temperature estimates and some sparse early instrumental records.

It should be noted that Bristlecone pines from California were a source of Michael Mann’s hockey stick reconstruction and use of strip back trees were not recommended for temperature reconstructions by the National Academy of Sciences. However, this approach used a different method for determining temperature.

Please read the whole article, down the page is an update to the Penn and Livingston projection of when the sunspots disappear.

Please read the whole article, down the page is an update to the Penn and Livingston projection of when the sunspots disappear.