Dec. 13, 2019: Something ironic is happening in Earth’s atmosphere. Solar activity is low–very low. Yet atmospheric radiation is heading in the opposite direction. Cosmic rays percolating through the air around us are at a 5 year high.

Take a look at these data gathered by cosmic ray balloons launched by Spaceweather.com and the students of Earth to Sky Calculus almost weekly since March 2015: 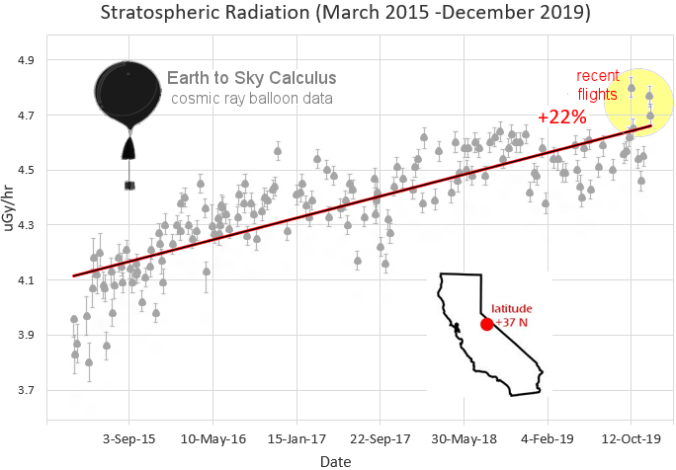 Radiation levels have been increasing almost non-stop since the monitoring program began, with recent flights registering the highest levels of all.

When cosmic rays hit the top of Earth’s atmosphere, they produce a spray of secondary particles and photons that rain down on Earth’s surface. This is what our balloons measure–the secondary spray. We use X-ray and gamma-ray detectors sensitive to energies in the range 10 keV to 20 MeV. This type of radiation, which you can also find in medical X-ray machines and airport security scanners, has increased more than 20% in the stratosphere. 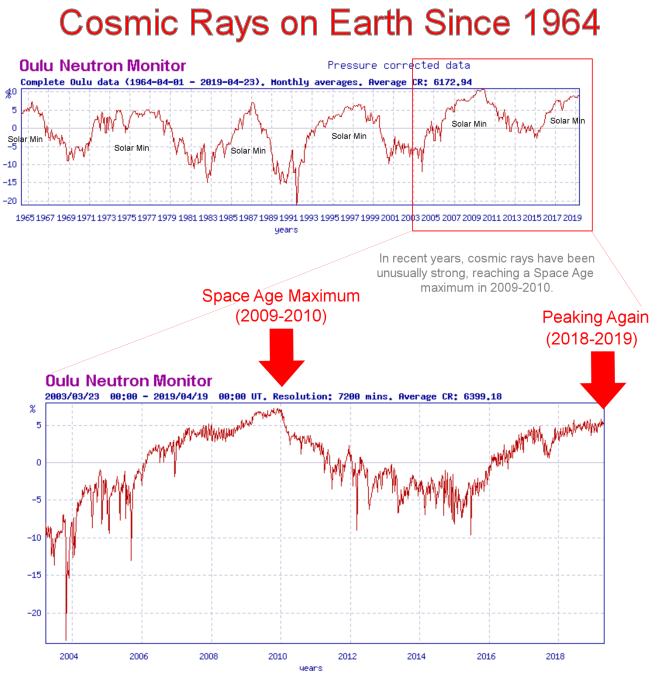 Another way to measure cosmic rays is using a neutron monitor. Neutrons are an important type of secondary cosmic ray. They reach Earth’s surface with relative ease and are biologically effective. Neutron monitors at the Sodankyla Geophysical Observatory in Oulu, Finland, are getting results similar to ours. Oulu data show that cosmic rays have been increasing for the past 5 years and, moreover, are within percentage points of the Space Age record.

The Space Age record for cosmic rays isn’t very old. It was was set in late 2009-early 2010 near the end of a very deep Solar Minimum much like the one we’re experiencing now. As 2019 comes to a close, neutron counts at Oulu are approaching those same levels. Indeed, a new record could be just weeks or months away.

Who cares? Anyone who steps on an airplane. Cosmic rays penetrate commercial jets, delivering whole-body dosages equal to one or more dental X-rays even on regular flights across the USA. Cosmic rays pose an even greater hazard to astronauts, of course. Cosmic rays can also alter the electro-chemistry of Earth’s upper atmosphere and are thought to play some role in sparking lightning.

One thought on “Cosmic Ray Update”