Skip to content
Shared Post by Dr. Tony Phillips from Spaceweather.com  Another example of how little we know about the electronic soup that surrounds our planet.

March 13, 2019: Long lines. Narrow seats. Baggage fees. You recognize this list. It’s the downside of flying on modern commercial airlines. And now we have a new item to add: cosmic ray neutrons.

Hervey logged 83 hours in the air as he traveled 41,500 miles above 30,000 feet. For reference, that’s almost twice the circumference of the Earth. The entire time, he gathered data on X-rays, gamma-rays and neutrons in an energy range (10 keV to 20 MeV) similar to that of medical radiology devices and “killer electrons” from the Van Allen Radiation Belts.

The results were eye-opening. During the trip, Hervey recorded 230 uGy (microGrays) of cosmic radiation. That’s about the same as 23 panoramic dental x-rays or two and a half chest X-rays. Moreover, 41% of the dose came in the form of neutrons. This confirms that cosmic-ray neutrons are abundant at aviation altitudes and must be considered in any discussion of “Rads on a Plane.” 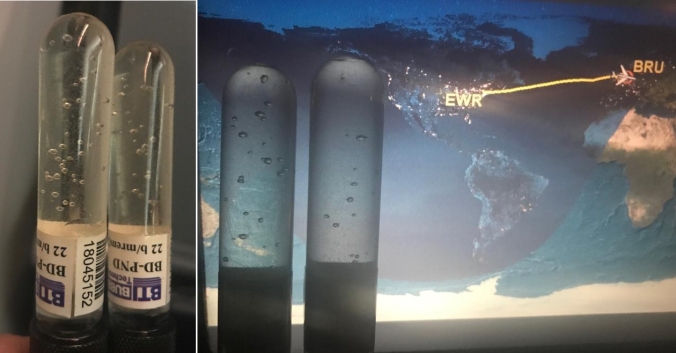 Researchers have long known that cosmic rays penetrate airplanes. Our own 3-year survey of global radiation shows that X-rays and gamma-rays at aviation altitudes are typically 50 times stronger than sea level. This new survey focuses on neutrons, a more potent type of radiation from deep space. Studies show that neutrons can be ten times more effective at causing biological damage compared to X-rays and gamma-rays in the same energy range. Neutrons are so effective, they are used for cancer therapy, killing tumors better than other forms of radiation.

Should we be worried about Hervey? Although he absorbed a lot of radiation during the survey, he did so slowly. Hervey’s whole body dose was spread out over 14 flights and 3 months–unlike, say, a dental X-ray which is localized to the jaw and delivered in a split-second. Slow delivery gives the body time to respond, repair damage, and move on without obvious health effects. On the other hand, at least one study shows that low-dose radiation received over a long period of time may slightly increase the risk of leukaemia, while flight attendants have been found to have a higher risk of cancer than the general population.

Our survey also revealed some geographical variations. Generally speaking, neutron radiation was stronger near the Arctic Circle and weaker near the equator. It was weakest of all, however, in flights over Chile as the aircraft skirted the South Atlantic Anomaly. We will be investigating these variations with additional flights in the near future.