In the 1990s, solar physicists, Penn and Livingston, called for a long decline in solar activity. This is the case and it is nice to see such work confirmed by events. Solar Cycles # 23 and 24 are the weakest since the early 1900s. The current run of consecutive Spotless Days is out to 33, or 75%, for the year.

[See Penn and Livingston paper and graphics below.]

So far this year, the count is out to 33 consecutive days, which is exceptional. So much so, that SILSO keeps a table of such long runs.

Solar Cycle # 24 is expected to reach its minimum by late in this year.

For hundreds of millions of years such changes in solar activity have been associated with changes from warming to cooling. And back again. The long run to the recent peak in activity was the strongest in thousands of years. Despite this, temperatures were not as warm for as long as set during the Medieval Warm Period. The end to that long trend and turn to cooling in the early 1300s was drastic, causing widespread crop failures and famine in Northern Europe and England. A book by William Rosen, “The Third Horseman” covers it thoroughly. The die-off from 1315 to 1320 is estimated at some 10 percent of the population. Deaths of cattle, sheep and horses were severe as well. All due to the turn to cold and unusually wet weather.

The change to what some are calling the Modern Minimum is significant. In geological perspective, it is now a built-in cooling force.

Rest of the Story HERE.

H/T Watts Up With That

I wrote some blog posts on Livingston and Penn in 2011.

Here is a paper livingston-penn-2008 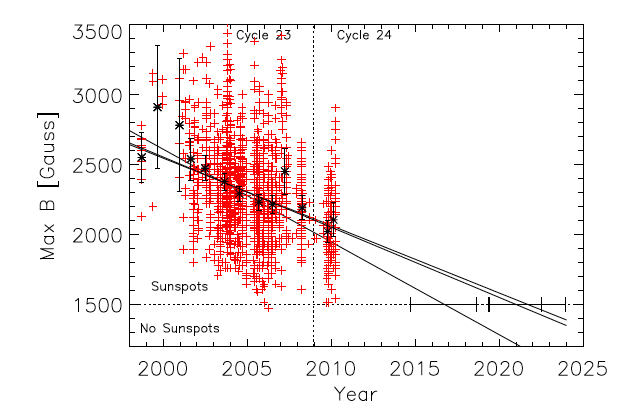