We are living in interesting times, we can observe the forces that control our climate. This is one of the interesting sites to watch.

Oct. 24, 2018: So you thought Solar Minimum was boring? Think again. High-altitude balloon flights conducted by Spaceweather.com and Earth to Sky Calculus show that atmospheric radiation is intensifying from coast to coast over the USA–an ironic result of low solar activity. Take a look at the data: 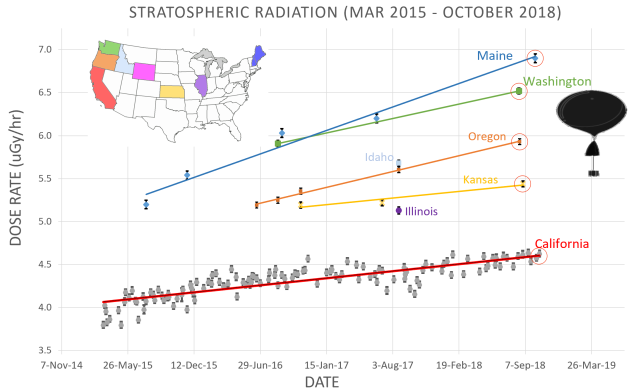 Above: Radiation dose rates at the Regener-Pfotzer Maximum, ~65,000 ft high at the entrance to the stratosphere.

Since 2015, we have been monitoring X-rays, gamma-rays and neutrons in the stratosphere–mainly over central California, but also in a dozen other states (NV, OR, WA, ID, WY, KS, NE, MO, IL, ME, NH, VT). Everywhere we have been there is an upward trend in radiation–ranging from +20% in central California to +33% in Maine. The latest points, circled in red, were gathered during a ballooning campaign in August-October 2018.

How does Solar Minimum boost radiation? The answer lies in the yin-yang relationship between…