The coming winter in the Northern Hemisphere looks to be shaping up for another massive event perhaps bigger than what we experienced in 2011/2012. The last winter coincided with the highest level of EUV and FUV since the beginning of SC24 which although low by normal standards the current UV level is trending quite a bit lower. In fact the current level is not far above the SC22/23 minimum. At present the EUV levels are less than half of the values recorded during the peak of SC23. 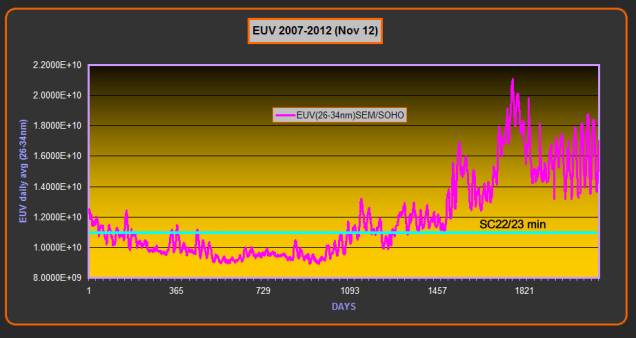 There is strong evidence that low EUV and FUV are major players in determining the jet stream position and strength along with major changes to ozone quantities at different levels of the atmosphere. UV also has an influence on the NH polar vortex which when the conditions are right favoring a negative AO over the winter months. When both of these options come together the greatest effect is felt in the Northern Hemisphere. During the summer in the NH and the winter at present in the SH the mainstream media are picking up the relevance of the jet stream patterns that are occurring. This is a shift from the previous year of not only of the knowledge gained but also of the increased activity of the jet stream through 2012. If this pattern continues into 2013 we should witness some big extremes in weather with blocking highs and masses of cold air feeding from the poles.

H/T to a regular leader for this e-mail tip.