As a conservative I have taken a very negative view of subsides for green energy, renewable energy, especially ethanol which consumes food for fuel.  I recently participated in a discussion of agriculture subsides and came to the realization that some agricultural subsides may have future survival benefits and may even have an impact on our national security.

As many readers of  this blog know, I have been examining the possibility of another Grand Minimum for some time, presenting studies and scientific evidence to support my position and for reader evaluation and comment.  There is growing evidence that a Grand Minimum similar to the Maunder is in our future, see references here, here, here, here and here.

One of the agricultural impacts of a Maunder scale minimum is long term drought. See my post on the Maunder Minimum and Fall of Ming Dynasty . Anther impact is shortening the length of the growing season, shifting regions of production farther south.

In 1980 Newman (see references) published a paper showing that the Corn Belt shifted 144 km per 1.0°C change in temperature. If the temperature were to all fall 5.2°C, the Corn Belt would shift 750 km south to the Sun Belt, as shown following graphic provided by David Archibald:

The outlook for Canadian agriculture is somewhat more dire, as wheat growing regions shift south into the the United States. (David Archibald) 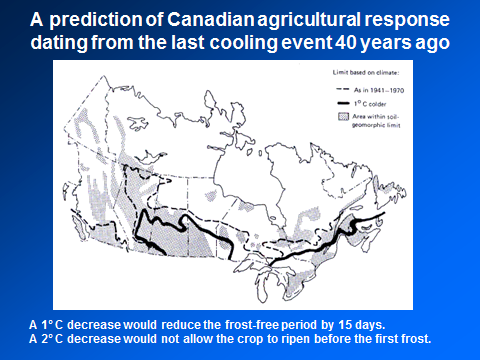 The stippled line is the current Canadian wheat-growing area. The heavy black line is where it would shrink to if temperatures fell by one degree Celsius. A decline of 2.0 degrees Celsius would move the growing region to the latitude of the US-Canadian border.  (David Archibald)

Has this happened before?  Yes it has according to archeological records. The map in the following graphic shows how Indian maize growing moved south in response to the onset of the Little Ice Age during the Maunder Minimum. (Reiley 1979, see references)(David Archibald).

These conditions would also apply to other wheat and corn growing regions around the globe.  One of the issues is if temperatures drop sharply as they have in the past, it will take farmers some time to adjust to the new realities of a colder world. During these shifts, production will fall and shortage will occur. Note the sudden cooling shown in this graphic below.

In the US we have an advantage as there is room for production to shift south and in the case of corn we have a production buffer, we can stop using corn for fuel and turn it into food. This gives the US some measure of food security.

What would be the impact on local agriculture if we experienced a grand minimum of the Maunder class? In the China Case, it resulted in long term drought and the fall of the Ming Dynasty.  According to climatology and geological records, California has also experienced some long term droughts.

National Academy of Sciences panelist Franco Biondi,  together with Kleppe  and  Scotty Strachan , create a poster presentation entitled Underwater Dendrochronology of Sierra Nevada  Lakes.  Philip Catarino, one of the divers that participated in the data collection had an online article,  Reconstructing Ancient Avalanches of the Sierra Nevada Range,  in which he observed:

During the last 500 years, a wet climate, punctuated by intermittent but substantial droughts, began to dominate the region, and lake levels again rose and cirques glaciers reformed in the Sierra. A series of substantial droughts are documented during this period, however. Dozens of submerged tree stumps are located up to 300 feet below the present day level of Donner Lake, a tributary of the Truckee River; carbon –14 samples from one stump date from AD 1433 (Lindstrom and Bloomer 1994). Another warm period, documented by tree-ring studies and Truckee River run-off, dated between AD 1579-1585, and again around AD 1630 (Hardman and Reil 1936).

It is possible that Lake Tahoe contributed relatively little water to the Truckee River during the last 200 years. During the century between the mid 1700s to mid 1800s, the level of Lake Tahoe may have been below its rim, with no water flow into the Truckee River. This is documented by a submerged stump in the Upper Truckee River Delta dating from AD 1720 (Lindstrom 1996a), one from Donner Lake dating from AD 1800 (Lindstrom and Bloomer 1994) and one in Emerald Bay dating to AD 1840 (Lindstrom 1992). The 40 years between AD 1875-1915 were the longest period during which the flow of the Truckee River was above the average. During the AD 1930s drought, Lake Tahoe ceased to flow from its outlet for six consecutive years. Drought within the last decade (late 1980s to 1990s) either stopped Tahoe’s flow into the Truckee or reduced it to almost nothing.

What about valley rivers flows during past Grand Minimums?   D.M. Meko, did a reconstruction of Sacramento River System Runoff From Tree Rings from 901 to 1977, for the California Department of Water Resources, published in July 2001.

Below is a plot of the Sacramento river flow from 903 to 1903. I chose this period to see what river flow looked like  before California  started storing water in dams in the river basin.  Note the multiple serial drought years, the  smooth plot is a 30 year average.

As you can see, Grand Minimums have resulted in reduced river flow, which would indicate long term droughts in California.  It could happen again in the Northern Hemisphere, here in California, China and across the globe. In the past these droughts have created regional food  shortages, resulting in civil unrest and the overthrow of governments.

I am convinced the evidence demonstrates that we are on the cusp of the next Grand Minimum and there will be major impacts on agriculture around the globe. This recognition has modified my views on agricultural subsidies.

Lets say we remove all agricultural food subsidies? What would be the impact? Many farmers would have to compete with farmers from around the world, and many would be unable to produce competitive products and go out of business.  We would become dependent for major food groups like rice from Asian countries. Like we are now dependent on oil from foreign suppliers because we refuse to drill on our own lands to provide the necessary fuel. We should not make the same mistake in agriculture.

Lets assume that Congress has eliminated all rice subsidies and we are now dependent on foreign suppliers.  And let’s assume that the next Grand Minimum is real and it creates wide spread drought in rice growing regions through out the world like past minimums have.  This long term drought would create rice shortages. Those rice growing countries would have an obligation to feed their own people first. Only when they had a surplus would they ship any to the US.  But, our rice farmers are no longer growing rice, they have sold their fields to developers and retired to the foothills.

When the long term droughts come we are going to need every scrap of food we can produce to feed our own people and survive as a nation. Insuring that America has a robust agricultural industry is going to be our key to survival.  Agricultural Food Subsides = Food Security.