Horst-Joachim Lüdecke: The Sun, not Man, warms the Earth

Dr. Lüdecke reports his major discoveries in the latest issue of the journal Energy and Environment. His paper can be down loaded HERE.

Dr. Lüdecke’s paper is very complex and for those not schooled in statistical analysis it might be hard to follow. I have extracted part of a discussion of the paper at the Climate Realist blog.

The new analysis indicates that changes in the Sun’s output of radiation, which depends upon anomalies in its magnetic field that show up as sunspots, are what really drives temperature changes here on Earth.

Dr. Lüdecke said: “The Sun is still recovering from the Maunder Minimum, the 70-year period from 1645-1715 when there were hardly any sunspots. It was less active then than during any similar period over the past 11,400 years. It was then that the Hudson in New York and the Thames in London used to freeze over in the winter.

“It is the unprecedentedly rapid recovery of the Sun’s activity over the past 300 years – far stronger than anyone had previously suspected – that has been the chief driver of global warming in recent decades. We have very little to do with it.”

Dr. Lüdecke’s analysis of the 200-year record of monthly temperatures measured by thermometers at five northern-hemisphere stations shows the Earth cooled almost as much in the 19th century as it warmed in the 20th.

Also, two 2000-year temperature reconstructions – one from a stalagmite, one from tree-rings – indicated that 100-year ups and downs in global temperature far stronger than those of the past 200 years were commonplace, strongly contradicting the “official” hypothesis that 20th-century global warming is unusual.

Dr. Lüdecke said, “The Sun gives its name and its warmth to the Solar System. One should look there, not here, for the true cause of recent global warming.”

I was most interested in the 100 year climate cycles shown here and the proxy recored shown below. 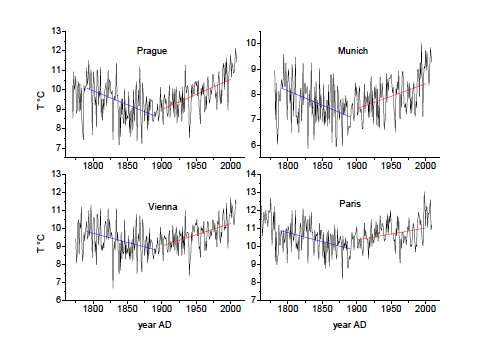 The data is clear, the sun is a major influence on our climate.

Says the UK could be “dominated by cold winters” for years.

“We expect another winter of unusual cold and occasionally disruptive snow from the British Isles and France across Germany and southern Scandinavia to the Baltic states.

“The highest likelihood of unusual cold appears to be in early to mid-winter (late November to January), with moderating conditions possible by February,” said senior meteorologist Richard James.

He said the UK would be “dominated by cold winters” for years due to a negative North Atlantic Oscillation, the atmospheric pressure weather system.

via Another forecaster warns of “mini ice age”.

Steven Goddard has a very interesting post at Real Science on the lack of sea level rise since 2002.  Is this decline a pending ice age indicator?

The most sophisticated sea level satellite is Envisat. It doesn’t show any sea level rise since it was launched in 2002, so our friends in the sea level community tried to hide it by painting it almost invisible yellow and not normalising the data properly.

Steve has an animation that shows the corrections and shows how completely bogus the claimed sea level rise trend is.

My question is where is the water going?  It is no longer filling the ocean basins.  Where is the ice building up?  Could the continuing lowering of sea levels be an ice age indicator?

“If we have been living under conditions 200 years ago, there would be starvation in Norway the coming year.”

Email from reader in Norway

In northern Europa  from June to September there has been unusual amount of precipitation. Our local newspaper told us that if all the rain had been coming down as snow, the snow height on the ground would have been 4,6 meter……

The grain harvest has been very bad this year, and so was it the two years before. The potato chips industries have problems with the quality and the volume of the harvest this autumn. The fields have been too wet for many farmers to use their machines.

What will this winter be? I do not know. It was blistering cold last winter, especially in December and January. Some stations in the southern part of Norway measured record low temperatures in December, in Agder and Hordaland, for 100 and 200 years.

According to my local wood seller, people have doubled their purchase this autumn. And so did I.

Thank you Robert for your efforts and your new website.

via Norway – Fields too wet for farmers to use their machines.

These are the conditions that will persist during the Next Grand Minimum. Stay Tuned.

A submarine volcanic eruption is taking place approximately 3 miles (5 km) off the southern coast of El Hierro, the smallest of The Canary Islands, says this article on irishweatheronline.

Initial reports of the eruption came from crews on four separate ships.

Scientists remain unclear if the emissions are gas or lava.

“The eruption takes place amidst an unprecedented earthquake swarm in El Hierro. The number of earthquakes recorded since July 17, 2011 on El Hierro has now exceeded 10,000.”

Although government authorities have suspended ferry activities to and from the 285 square-km island, and have recommended that boats should not sail closer than four miles off El Hierro, and have warned divers to suspend all activities, the estimated 11,000 residents of El Hierro were being reassured not to be alarmed.

Britain should brace itself for another freezing winter with the return of La Niña, a climate phenomenon known to disrupt global weather, ministers have warned.

La Niña, in which cold water piles up in the equatorial eastern Pacific, is linked to extreme winter weather in America. Some suggest that last year’s strong La Niña was linked to Britain’s icy winter, one of the coldest on record.

The connection between La Niña and weather in Europe is scientifically uncertain but ministers have told transport organisations and emergency services to take no chances.

The warning coincides with research from the Met Office suggesting Europe could be facing a return of the “little ice age” that gripped Britain 300 years ago, causing decades of bitter winters.

The prediction, to be published in Nature, is based on observations showing a slight fall in the sun’s emissions of ultraviolet radiation, which over a long period may trigger mini ice ages in Europe.

via Sunday Times: Europe May be Facing Return Of ‘Little Ice Age’.

Stay Tuned for more on this issue once the study is published in Nature.

MADRID AP — The regional government of the Spanish Canary Island of El Hierro has issued a volcanic eruption alert following almost 10,000 small tremors recorded in the past three months.

The government posted a yellow alert — second level in a scale of four — Sunday and closed some hillside roads and a tunnel to avoid possible injury by falling rocks.

The islands 11,000 residents have been told to monitor communications by the civil protection authority. The island was shaken late Saturday by a 4.3-magnitude quake. Seismic activity began in the area on July 17.Like all the Canary Islands, El Hierro was formed by volcanic activity. It has some 500 volcanic cones.

[Editor Note:  This is a long and important post by David Archibald at WUWT.  I will be posting some of the graphics under the Wheat Tab above next week with my comments.]

Grain prices fell 70% in constant dollar terms from the Korean War to the end of the 20th century. In 2008, energy-related inputs relative to total operating expenses were about 60% for both wheat and corn. A $200 per barrel oil price will raise operating costs by 60% from the 2008 level. A similar price response was experienced during the First Oil Shock of 1973. This time the price increase will be permanent.

via Watts Up With That?.

Iceland’s massive volcano Katla appears on the brink of a major eruption just days after officials confirmed they had detected the start of eruptions over the summer.

I was researching a question my son-in-law asked about snow fall in La Niña years, if we have one heavy snow year, can we expect more of the same the next year.  I could not find any strong evidence for that case, but I did note something in the data. There was more snow on average during the last cool phase PDO, (1949-1977) than the following warm phase PDO (1977-2003). Here is what I found when I looked two weather stations at Lake Spaulding (7020 ft) and Strawberry Valley (5160 ft).